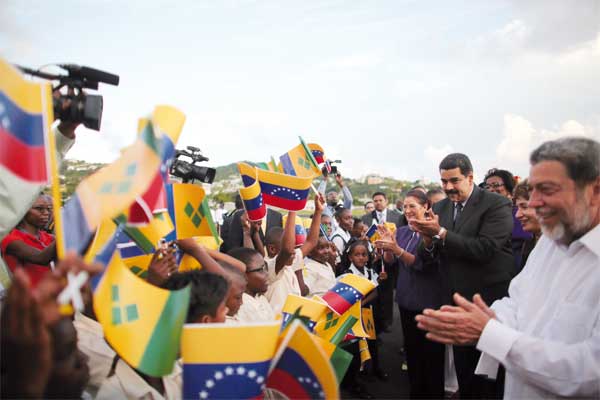 THE Venezuelan Head of State, Nicolás Maduro continued his visits to the OECS countries last Sunday with a trip to Saint Vincent and the Grenadines to strengthen bilateral ties with that Caribbean island.

The President, with his Foreign Affairs Minister Delcy Rodríguez, and other members of his government were welcomed by the Prime Minister Ralph Gonsalves, at the E.T. Joshua International Airport.

On his arrival, Maduro stressed that the Caribbean peoples were example of co-operation for the rest of the world. “We are building the great homeland”, he added, pointing out that the Caribbean was an area of social, economic and political stability.

In his response, Prime Minister Gonsalves stressed his total support for the Bolivarian Revolution and its struggle for its independence and sovereignty.

During the visit Maduro announced a new initiative that he said would bolster trade between Venezuela and the Eastern Caribbean as he wrapped up another of his one-day visits to the Caribbean Community (CARICOM) countries.

Maduro also said that Caracas would be willing to invest in St. Vincent and the Grenadines as the “hub” for the construction of low-income houses for the region under PetroCaribe, the oil initiative his country has with several Caribbean countries.

“There should be no doubt in our minds that PetroCaribe today is the backbone of the energy, social, economic development of our regions,” he said, adding “we need to find a hub in this region where we can be the centre of construction of PetroCasas (houses) for the region.

He said the construction of “50 PetroCasas … will be a pilot project that will be a model for future investments in St. Vincent and the Grenadines”.

Maduro, who also announced that his country would be making available, 7,500 lap tops to the government, said that through “fruitful discussions” between Venezuela and St. Vincent and the Grenadines government officials, agreement was reached on the “mechanisms in order to improve trade relationships between the two regions … in the fields of tourism, commerce, etc.

“In order to achieve these goals … I just want to announce the creation of a new tool that will be exclusively devoted to foster trade among three regions of eastern Venezuela and St. Vincent and the Grenadines and the Eastern Caribbean.

“This will be called the Centre for Cooperation of External Commerce of Eastern Venezuela and the idea is to facilitate all the customs, transportation and operations for these projects [in St. Vincent and the Grenadines],” he added.

Maduro has in recent weeks visited a number of CARICOM countries, including Suriname, St. Kitts-Nevis, Dominica, Grenada, Saint Lucia and Antigua and Barbuda, drumming up support for his Latin America and Caribbean integration movement.
He took the opportunity here of urging Caribbean governments to see the wisdom of the integration movement saying if the theories of the past are continued to be applied today “they will result in the same poverty, unemployment etc.”.