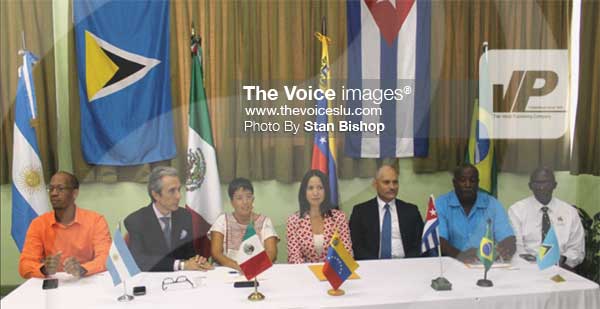 Latin American And Caribbean Productions To Be Screened.

SAINT Lucian filmmakers will have their cinematic works showcased alongside those of Latin American origin at the inaugural Latin American and Caribbean Cultural Festival next week.

The five-day film festival will run from Monday to Friday and feature films from Saint Lucia, Brazil, Cuba, Argentina, Mexico and Venezuela. All screenings will be held at the National Cultural Centre (NCC) between 1:00 p.m. and 6:30 p.m. each day.

The foreign films being featured are as follows:

The film festival is being organized by the respective embassies in collaboration with the Cultural Development Foundation (CDF) and organizers are hoping that the festival deepens the friendships among the countries involved. The festival is also being touted as a vital avenue whereby Saint Lucian filmmakers can network with other filmmakers from the wider Caribbean and Latin America.

“This cinematic setting is designed to demonstrate the diversity of the spiritual, material and affective characteristics of our societies which allows us to connect with our histories and facilitate the understanding of our values, beliefs and traditions,” Venezuelan Ambassador to Saint Lucia, Leiff Escalona, said at last Thursday’s press launch.

The ambassador added that the Venezuelan Embassy will also host an exhibition at Blue Coral Mall next Thursday dubbed “Poets of the Caribbean”.

Meanwhile, the Mexican Embassy will also be showcasing some of that country’s art and craft works at a small exhibition at the National Cultural Centre during the film festival.

Admission to all screenings during the film festival is free to the public.