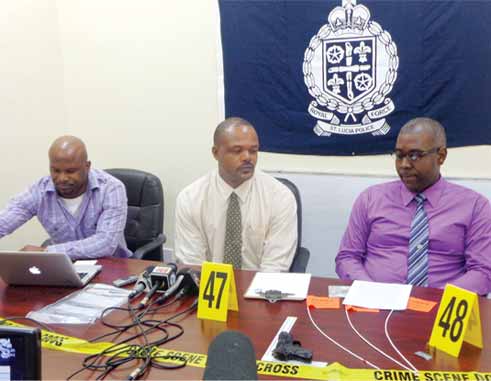 THE highest number of reported crimes for the third quarter of this year took place in the northern sector of the country.

The country is divided into three sectors, namely the northern, southern and central sectors.

Police Thursday said that 5116 crimes were reported in the northern part of the island accounting for 38 percent of all crimes reported on the island.

Police say that for the third quarter of the year slight increases were recorded in some major categories of crime with the exception of crime against property and summary offences.

From January to September of last year the country recorded 25 homicides. This was reduced to 21 this year. With respect to murders this went down by three to 20 this year compared to 23 last year.

More people were murdered in the central sector of the island. That number is 12. In the southern sector there were five murders and three in the norther sector.

Regarding offences against persons for this year 3,206 were accepted with 1,902 being detected.

Sexual offences increased slightly this year with 194 being accepted and 102 being detected, compared to the same period last year and 188 and 120 being detected.

Three thousand, eight hundred and twelve offences against property were reported with 1230 being detected. For January to September of this year 3,238 cases were accepted with 994 being detected.

Sexual offences and crimes against persons were the only major crime categories which recorded an increased number of accepted cases of 38 percent.

There was a decrease in the detection rate of firearm offences. According to police this may be attributed to an increase in discharging firearm cases where most of the offenders are not known.

Possession of cannabis and intent to supply cannabis continues to remain the highest recorded drug offence.