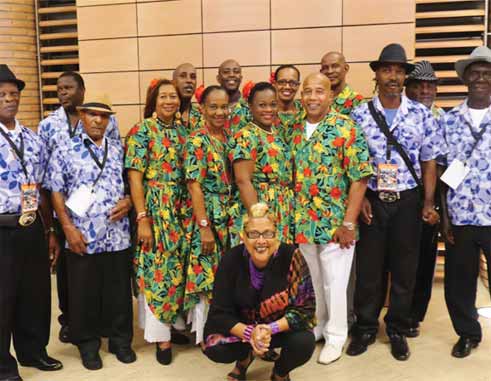 THE sixth edition of the Festival International de Haute-Taille and the Quadrilles du Monde in the town of Francois in Martinique, took place from June 12 to 22.

Saint Lucia was well represented, as agent Jackie O. arranged for the group to participate in this year’s festivities and accompanied them on the visit. The group consisted of The Eastern Folk Band headed by renowned violinist Angus Jean Baptiste and legendary Quadrille dance group, Les Danseurs TraditionnelsSte.Lucie.

The town of Francois hosts this festival every two years and in the past, have invited foreign groups as their guests from Mauritius, Italy, Scotland, New Orleans, Trinidad and Tobago, Poland and Saint Lucia in 2001.

Saint Lucia participated from Friday June 19 to Monday June 22. A packed programme awaited them consisting of three performances and an exchange where they networked with 20 groups from Martinique and a group each from Saint Croix and Guadeloupe. There was also the church service and the parade through the streets of Francois culminating with a closing ceremony.

The group from Saint Lucia seemed to be crowd favourites and was complimented immensely by the Mayor and his committee a well as their fellow performers. The group of dancers and musicians was unique and stood out because of the variety of dances and music which they displayed and performance of the ‘grand rond’ which calls for audience participation and which was very much appreciated by all.

The exchange on the Saturday morning saw the musicians of Saint Croix and Saint Lucia playing together enabling the Saint Lucian Dancers to show the ‘grand rond’ to the other groups of dancers which was very important as this was the purpose of the exchange.

Fred Jean Baptiste of Bélè Label Mizik, the producer of the show, hosted the group with and made sure that the scheduled programme of the entire visit was meticulously followed. The group was treated to a visit to the Clement Rum factory where a tour was conducted and where they took in a little of the history of the town.