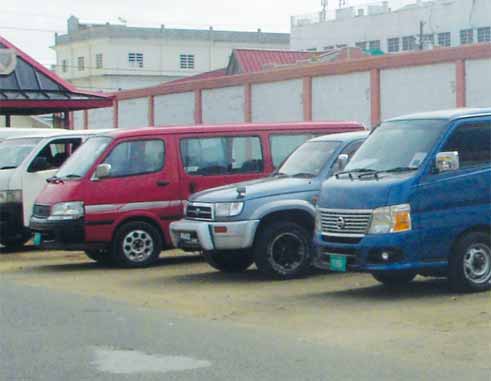 THE tyres of some 15 motor vehicles in Vieux Fort were discovered damaged last Saturday morning in what their drivers described as a mischievous act. Approximately ten of the vehicles were minibuses plying the 2H route (Vieux Fort\Castries).

At the time of the incident, the minibuses were parked on their stand on New Dock Road, near the Phillip Marcellin Grounds. Others, which are private vehicles, were parked on the same road, a few metres away from the bus stand.

The incident forced some of the drives to take the day off.

A number of minibus operators plying the 2H route usually leave their buses on the stand (for the rest of the day after working,) in order to get an early peg the following day.

Tyrone Jankie, one of the drivers affected said, : “On Saturday morning I got a call from a friend telling me that the tyres of my vehicle were slashed. I quickly went to check my vehicle and was surprised to see what had happened to it,” Jankie said.

He added that all four of the new tyres under his vehicle were destroyed.

James Ferdinand, another driver, said he was annoyed when he realized what had happened to his vehicle.

Another said: “Woe be unto those persons who feel they can destroy anybody’s property and feel they will get away with it.”