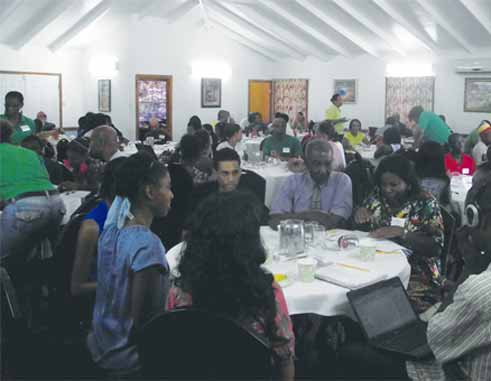 ON June 6, beginning at dawn in the Pacific Islands and ending at dusk in the West Coast of the United States, citizens around the world will take part in the largest ever public consultation on climate change and energy.

This unique World Wide Views (WWViews) Day is in support of an ambitious new, universal climate change agreement that the nations of the world will conclude under the United Nations Framework Convention on Climate Change (UNFCCC) in Paris, in December.

WWViews is being organized locally by the Saint Lucia National Trust (SLNT) and is in the process of recruiting 100 participants for the one day meeting. The Trust’s Communications and Advocacy Officer, Karetta Crooks Charles said: “This is the third time the Trust is partnering with the WWViews Alliance to raise the level of awareness of the public and provide an opportunity for citizens and residents to be a part of the decision making process regarding environmental matters at the highest level. Furthermore, this initiative can be deemed as a proactive response to the 2015 Earth Day theme ‘It’s Our Turn to Lead’, and a response to a call from the Minister with responsibility for Sustainable Development, Energy, Science and Technology, Senator, Dr. James Fletcher made at the Trust’s Earth Day celebrations for Civil Society Organizations in small Islands to increase their advocacy on climate change issues ahead of the Paris meeting”.

Participation in WWViews is free, however, interested persons must enroll by the new deadline of Wednesday, May 27 at http://tinyurl.com/WorldwideviewsSaintLucia2015. Transportation will be provided to and from the Golden Palm Events Centre in Rodney Heights for registered participants traveling from Castries, Vieux Fort, Soufriere and environs.

On the day itself, June 6, groups of hundreds of citizens reflecting the demographic diversity of their countries will attend day-long meetings to discuss climate change and energy issues, express their views and make up their minds about what they want their governments to do to ensure a sustainable future.

The results from the global event will be ready in June, giving everyone from policy makers to businesses, from civic leaders to investors a unique and timely insight into the views of citizens worldwide on the key issues that governments need to address in order to reach an effective new climate change agreement.

The results from World Wide Views will also be presented at the Paris COP21 UNFCCC climate change conference. “We are very excited that the World Wide Views on Climate and Energy is being organized and happy to collaborate with such an important initiative. Bringing forward the views and the voices of citizens from across the globe can only contribute to a positive new universal climate agreement in Paris in December. In supporting this unique and novel approach, we believe we are also making an important contribution to Article 6 of the Convention as it relates to education and public awareness,” said Christiana Figueres, Executive Secretary of the of the UNFCCC.

All the citizen meetings will be organized in an identical way in order to make the results comparable.

The results will be published immediately on a web platform as they are collected throughout the day. They will then be presented and distributed to the negotiating teams and shared with other policy makers and stakeholders not only at COP21, but importantly at key events leading up to the Paris Conference.

The project is initiated by the Danish Board of Technology Foundation, Missions Publiques, the UNFCCC Secretariat and the French National Commission for Public Debate in partnership with World Wide Views. WWViews in Saint Lucia is sponsored so far by the French Government and Consolidated Foods Limited through its Super J – IGA Green Bag Fund. We are also thankful for the in-kind contribution by Coco Resorts. The Trust takes this opportunity to encourage other businesses to assist with this important initiative considering the vulnerability of Saint Lucia to the impacts of climate change.