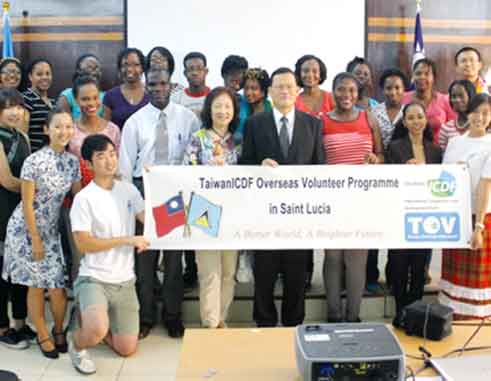 JUST over a dozen Saint Lucians received their certificates of participation last Saturday afternoon at the Union Orchid Garden following an intensive semester of learning to speak Chinese Mandarin.

The presentation ceremony coincided with the observance of Taiwan’s Culture Day.

The Let’s Speak Chinese programme was coordinated by the Taiwanese volunteers based in Saint Lucia. The Saint Lucian students spent a semester learning the language, which is the official language spoken in Taiwan and one of the most-spoken languages in the world.

Taiwan’s Ambassador to Saint Lucia, James Chang, had some encouraging words for the students as well as their tutors.

“I would like to congratulate the Mandarin class students who have dedicated their time and passion to the Mandarin language and made amazing progress,” Ambassador Chang said. “For this achievement, I also take this opportunity to thank the Saint Lucia/Republic of China (Taiwan) Alumni Association and our Taiwan ICDF Overseas Volunteers who have also dedicated their time and knowledge to make this happen.”

The Mandarin class was established in April last year and classes were held in the ICT Centre on Bourbon Street in Castries. Three semesters of intensive classes have resulted in over 40 Saint Lucians interested in the language and Taiwanese culture benefitting immensely from the programme. The course introduced the students aged, between 8 to 50 years old, to Mandarin gradually through daily conversation, focusing on speaking and listening abilities.

Ambassador Chang told the students that Mandarin is increasing in popularity and usefulness around the world. He added that with more Saint Lucians showing interest in the language, deeper cultured ties between Saint Lucia and Taiwan can be fostered.