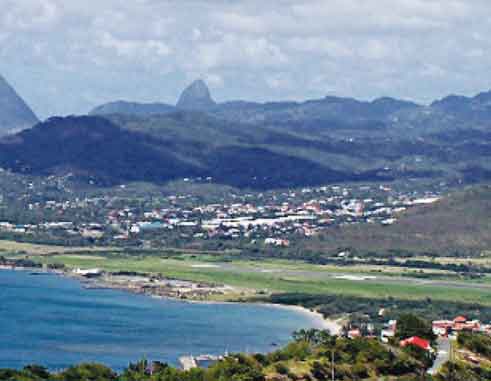 ST. LUCIA Electricity Services Limited (LUCELEC)has said that it has no plans to establish a coal generated power plant in the country contrary to a published statement by Dr. Anderson Reynolds, of Vieux Fort.

In fact LUCELEC said that its concentration is more on renewable energy adding that it has plans for the establishment of wind and solar generated energy which could very well be on stream by year’s end or shortly after.

The electricity company is puzzled by the information in Reynolds possession that would have led him to boldly make such a statement about a coal plant.

According to Reynolds it is his understanding that Invest St. Lucia had proposed to make available to LUCELEC over 60 acres of land in the La Tourney area for the establishment of the plant. He said that the proposed coal generated power plant was coming at a time when both the electricity company and the government were known to be pursuing an agenda of green energy.

He wanted to know whether Invest St. Lucia and LUCELEC had consulted with the community (whose health would be affected) on the placement and environmental feasibility of the plant’s establishment.

Roger Joseph, LUCELEC’s Corporate Communications Manager noted that the company had been looking at its next phase of expansion and that the land identified by Reynolds is the spot LUCELEC also identified for its expansion because of its topography and the fact that Vieux Fort continued to be touted as the next development frontier of St. Lucia by succeeding governments.

He added that security purposes and technical reasons were also factors leading to Vieux Fort being chosenas the venue for the company’s expansion phase.

“In looking at the type of plant to set up coal was not one of those we looked at. We did look at natural gas,” Joseph said.

LUCELEC is looking at establishing a three megawatt solar photo voltaic plant in Vieux Fort and is hoping that by year’s end it would have at least one megawatt of solar energy up and running. The idea is to organize the plant in phases leading to the three megawatts envisioned.

The acreage of land for the solar plant has been reduced since. Invest St. Lucia had taken back some of the land previously allocated to LUCELEC for the expansion of the Vieux Fort cemetery, a move that forced LUCELEC to put in a new application to the Development Control Authority (DCA).

It is unclear whether LUCELEC is in possession of the DCA’s approval, however if not, it’s simply a matter of time before that approval is granted, according to an informed source.

What is certain, however, is that LUCELEC will be conducting an environmental impact assessment study before constructing anything on the land.

“We have been planning to meet with residents in the area. We have a public awareness plan that includes the community,” Joseph said, adding that plans for the photo voltaic plant are definitely on.

The Company is also going full steam ahead with its plans for a wind farm, which is several wind turbines (windmills) group together to generate electricity.

According to Joseph a 12 megawatt wind farm is being looked at somewhere in the Dennery area not too far from the Bordelais Correctional Facility.

He said that soon the company will be erecting equipment in the area for testing of the wind direction, its speed and to determine the proper type of wind turbine to be erected.

A wind turbine works like a high-tech version of an old-fashioned windmill. The wind blows on the angled blades of the rotor, causing it to spin, converting some of the wind’s kinetic energy into mechanical energy. Sensors in the turbine detect how strongly the wind is blowing and from which direction. The rotor automatically turns to face the wind, and automatically brakes in dangerously high winds to protect the turbine from damage.

Wind energy as an alternative to fossil fuels. It is plentiful, renewable, widely distributed, clean and produces no greenhouse gas emissions during operation. The effects on the environment are said to be generally less problematic than those from other power sources.