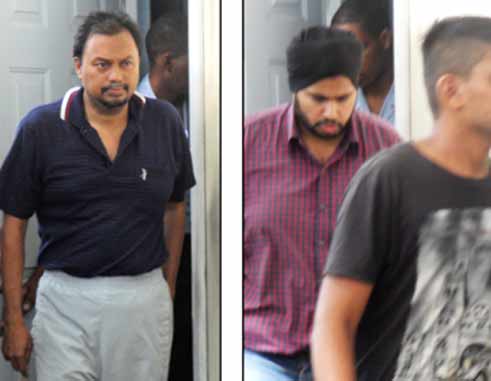 FOUR Asian men connected with the controversial Lambirds Academy who have been charged with human trafficking and money laundering appeared in a magistrate’s court yesterday. The case was adjourned to April 24.

The men were held in the holding facility at the Castries court house for the entire morning , but appeared calm when they were called into the court room, a door away from where they were waiting for the commencement of their case.

Waiting patiently outside from mid-morning were 12 members of the 60 plus students who recently made a formal complaint to police claiming that they were tricked into paying thousands of American dollars to come to Saint Lucia to study at the Lambirds Academy which is located in Gros Islet. They were later seen leaving the court premises.

The case has kicked up a firestorm here with political overtones. One of the four men arrested is the Lambirds Academy’s incorporator. He is Dr. Iftekhar Ahmed Shams, a national of Bangladesh who holds majority of shares in the school.

The academy was incorporated in May 2014 with only two directors who are also the company’s only shareholders. Sayeed Ahmed Shams, another Bangladeshi, is the other director and shareholder. Koushar Kumal Batukbhai Chudasama was appointed secretary on May 28, 2014.

The academy’s registered office is at Bonne Terre, according to records at the Registry of Companies with its main types of business registered as vocational, trade, educational, professional training, education and human resource management consultancy.

The four arrested men who have been denied bail by a magistrate also face charges of money laundering. Their charges stemmed from complaints by young nationals of India and Nepal who arrived here, some on a one way ticket, to pursue studies at the academy only to realize after a few days here, they said, that classes were not to be held and that the promises they were given were false.

Police say that more charges are likely to be brought against the four. The government has promised a full inquiry into the scandal, something that the opposition United Workers Party has also called for. The government has been under criticism, including from some of the affected students, over its handling of the matter.

Leader of the Opposition, Dr. Gale Rigobert has taken the government to task for what she said was its attempts to absolve itself of responsibility in the scandal when it was clear that several government agencies facilitated the establishment of the academy and gave it permission to operate in Saint Lucia..

A release from the Office of the Prime Minister has conceded that there were “some very troubling aspects” about the Lambirds matter and that the Cabinet of Ministers had taken a decision to conduct an independent inquiry to determine, among other things, how the investors were granted approval to operate in Saint Lucia, how the Asian young people arrived here and what were the arrangement made for their studies and welfare.

The UWP Wednesday called for an independent inquiry into the Lambirds Academy matter which it said had resulted in the abandonment of educational pursuits by scores of foreign students on the island. The UWP said that whereas the Labour Party Government had indicated that the matter was in the hands of the Director of Public Prosecutions, there were still many questions that were yet to be answered.