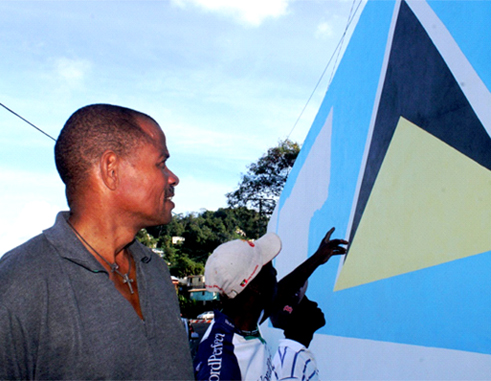 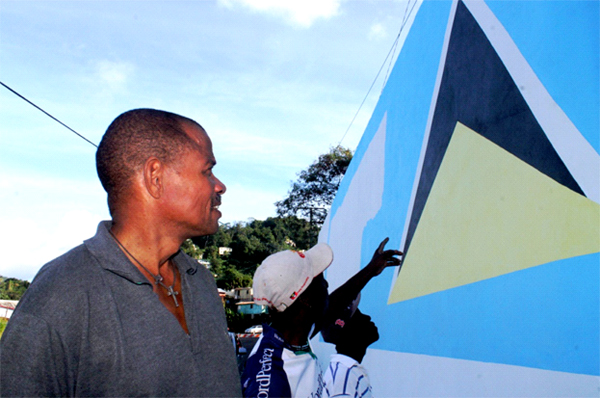 THOSE who know acclaimed and iconic painter Sir Dunstan St. Omer well would know that his sons, too, are as passionate as he is about their art. At times it’s tempting to label them “art-vocates” whenever you hear them speak about what art can do for us if only we appreciated it more.

Alwyn St. Omer is one such good son who says he is doing his best to give art its rightful place in Saint Lucian society, especially in public places. About eight years ago, he and a team of assistants did some artwork on a wall near the entrance to lower Hospital Road. However, due to the fragile nature of the porous rubble wall, the natural elements faded their efforts.

After many attempts at getting the Castries Constituency Council (CCC) and other public entities to chip in on the recovery effort and told that resources were scarce, St. Omer soon found himself approaching the private sector. Over the past year, a few business-places have given support to the project, including Buckeye International, C.O. Williams, Digicel, LIME, Sun General Insurance, Jeffrey & Jeffrey Ltd, Saint Lucia Insurances Ltd, Carasco& Son Ltd, Northwest Ltd, Jamecob’s Quality Construction Ltd, Bank of Saint Lucia, Insurance and Services, and Du Boulay’s Bottling Co. Ltd.

“When I designed this wall, I wanted a visitor to Saint Lucia to have an idea of who we are as a people,” St. Omer told The VOICE last Sunday afternoon. “Many times our island is portrayed as just sun, sea and sand. But we are a people of culture. We have our own way of life and national pride.”

The artists said he is hoping that the wall serves as a symbol of national unity and national pride. He also hopes that Saint Lucians especially see the wall as more of an apolitical symbol – “it’s not a Flambeau thing or a Labour thing.”

The close to 100-foot wall brings a sense of vibrancy to a community that makes the news mostly for the wrong reasons. While many walls are built to divide, the artistic work-in-progress spearheaded by St. Omer seeks to bring people together in unity and peace. He is also appealing for extra hands to come on board.

“We’re hoping that after the drawing stage is done, I would like to give some of the talented young people the opportunity to work with me on this wall,” St. Omer said.

St. Omer told The VOICE he’s working against time in order to get the wall done by February 22, Independence Day. As such, he is appealing to other corporate sponsors to chip in on financing the project.