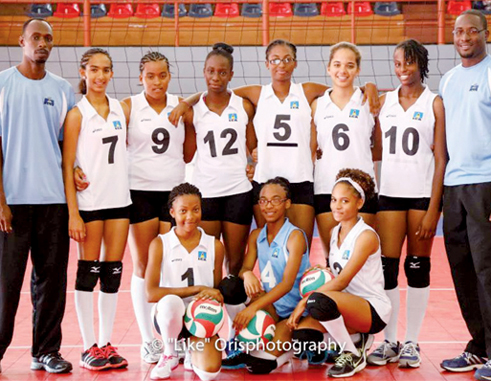 NO athlete dominated the local sports landscape in 2014 like high jumper Levern Spencer who made several podium calls, most significantly winning bronze at the Commonwealth Games in Glasgow, Scotland and gold at the Central American and Caribbean Championship in Mexico.

The 30 year old who hails from Babonneau carried St. Lucia’s national colours with pride over the period under review. Here are some of the major sports highlights of the year:

In March Spencer finishes 7th place in the finals at the World Indoor Championship in Poland.

In Boxing – St. Lucia emerged as Goodwill Champions, capturing 3 gold, 2 silver and 4 bronze medals to end up on 17 points. ahead of Guyana and Martinique. St. Lucia’s LyndellMarcellin was named boxer of the tournament.

In April playing at home, St. Lucia emerged champions of the Windward Islands Under -15 cricket tournament, with 11 points from five wins and one “no decision.

Four St. Lucians named on the Windward Islands squad to participate at the WICB U-15 tournament in Jamaica : Jeannelle Eugene, Semion Gerson, KemaniMelius and Dane Edward.

Track and Field, St. Lucia finished in 10th place at the 42nd Carifta Games held in Martinique. The St. Lucia team won 1 gold and 1 silver, the Gold by Mickey Ferdinand in the Pole Vault; boys under – 20 with a height of 3.80 metres, while Ashlene Edward won the silver in the girls under -18 high jump clearing 1.60 metres. She was one of three athletes who tied for the silver medal.

In Netball it was disappointment for St. Lucia’s national under -16 netball team at the Caribbean tournament. The home team did not win a match.

In May, Darren Sammy retired from Test cricket after being replaced as West Indies captain by DeneshRamdin. The all-rounder who led the Test side from 2010 with victories over Bangladesh, Zimbabwe and New Zealand during his tenure as captain,

In Track and Field, number of records were smashed at the 1st National Bank 14 and under championship held at the Mindoo Phillip Park.

In July, St. Lucia emerged champions of the 2014 Under – 23 Eastern Caribbean Netball Championship with a 52 – 46 victory over defending champions St.Vincent and the Grenadines with a standout performance from their captain and eventual MVP of the tournament Ianna Hippolyte.

St. Lucia emerged champions of the revived OECS Senior Track and Field championship held in St. Kitts and Nevis. The St. Lucia contingent captured 5 gold, 2 silver and 6 bronze medals in the two day event and by all accounts this was one of the best outings in years by local track and field athletes.

In Boxing , defending champions St. Lucia finished in second place one point behind the eventual winners Cayenne/French Guyana in the 2014 Creole Boxing Championships which took place in Guadeloupe.

The St. Lucians finished the championships with four gold, six silver and one bronze medal. St.Lucia also took the Best Disciplined Team award, while referee Cecil Kerr who officiated during the tournament was named “Best Referee.”

In August, Grenada emerged as champions of the Windward Island School Games held here. The athletes from the Spice Isle topped the points table with 45 , followed by St. Vincent and the Grenadines second on 31 points, Dominica 21 points and host St. Lucia in the cellar position.

At the Commonwealth Games, St. Lucia was represented by its biggest contingent ever in Glasgow, Scotland. Levern Spencer made a podium call when she won a bronze medal.

October – Football, St.Lucia Under – 17 team qualified for the Caribbean Football Union finals scheduled for Honduras in 2015.

In November the home team captured a third Organization of Eastern Caribbean States (OECS) title in the last four years, defeating defending champions Grenada by 83 points when the curtains came down on the 24th swimming championship held at the Rodney Height Aquatic Centre.