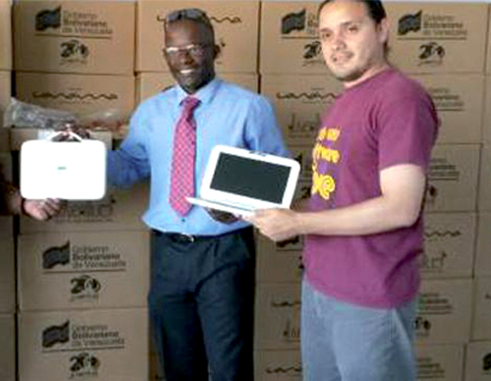 THE Government of Saint Lucia has received the first in a shipment of 7,000 computers from the Government of the Bolivarian Republic of Venezuela through the Canaima Educational Project.

The project began in Venezuela in 2009, by providing laptops to students for use at school. In 2010 the initiative was tweaked to provide the young students each with a computer that they could take home, in an effort to allow entire families access to information technology.

The project expanded to Saint Lucia after the government requested the computers through Saint Lucia’s Ambassador to ALBA and PetroCaribe, Vincent Eustace Vitalis, as part of an initiative to introduce information technology to education through schools.

On December 20, the first 1000 Canaima laptops arrived at the Hewanorra International Airport. The laptops were received by Chief Education Officer Marcus Edward, and Saint Lucia’s Ambassador to ALBA and PetroCaribe, Eustace Vitalis, and handed over to the Ministry of Education by a delegation representing the Embassy of the Bolivarian Republic.

The remaining 6,000 laptops are expected to arrive in February, ahead of the start of the 2015-2016 academic year. The computers, when received, will be distributed to students in forms three and four at secondary schools island-wide.