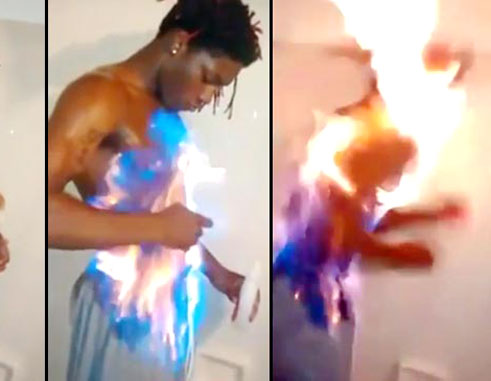 A devastating American trend which has been setting social media ablaze this year has reached St. Lucian shores, sending one teenager to the Intensive Care Unit of the Victoria Hospital and teaching him that not every trend is meant to be followed.

The trend which has become increasingly popular amongst teenagers in the United States is called the Fire Challenge.

According to Wikipedia it is the application of flammable liquid to one’s body and then setting one alight whilst being video recorded. The results are then posted to social media.

In addition to the obvious dangers, many participants run away in panic without first dousing the flames. This allows the oxygen to make the flames spread more easily.

Another immediate danger is the participants inhaling superheated air which can then damage the lungs.

One local mother is feeling the burn after her 16 year old son nearly lost his life whilst attempting the challenge on Wednesday night.

An emotional and physically drained Samantha Jn. Paul of Bishop’s Gap told THE VOICE exclusively on Monday of the whirlwind of emotions that she is currently going through seeing her son in his current state.

Jn. Paul said she does not know all the details of the incident as even though she was at home at the time, her son, had shut himself in the bathroom to perform the challenge.

According to her daughter who was also at home at the time and subsequently saved her brother’s life, her son had doused himself in hand sanitizer and set himself alight with intentions of running into the shower to put out the flames immediately.

The distraught mother said whilst this was going on she herself went into a state and passed out. It was left to her daughter to put out the flames and her son was rushed to the hospital where he was admitted in need of intensive care.

Since the incident, the student of the George Charles Secondary School is filled with regret. His mother said: “He’s taking it hard as anybody would to see that you look one way and now you look different but he’s dealing with it. He’s a strong boy and I think he’ll pull through”.

She said thankfully, he has shown speedy improvements. The youngster was unable to see as he had received second degree burns to his face as well as half of his back and his entire front. However, in the days since the incident, his vision has recovered.

Jn. Paul said before this trend landed on her doorstep, she was completely oblivious to anything of this nature. She said the only trend she had known about was the “ice bucket challenge”.

Words, she said, could not begin to express how she felt as a mother to see her on suffer. She said: “As much as I’m feeling the anger that he did that, seeing your son like that, I feel like it should be me. I should be feeling that kind of pain”.

Jn. Paul sent out a message to parents, especially those like herself who are unaware of the dangers that lie in the cyber world for the young and impressionable. “Speak to your children and let them know that whatever challenge they come across on the internet that they shouldn’t try it because all is not what it may seem. It might look one way but trying it could lead to horrifying consequences and situations”.

As for the youngsters who might be interested in going down the same route as her son, she said: “Don’t try these things. Please trust me because my son is in a lot of pain at the hospital and he said if he had to turn back the hands of time, he would never ever do that. So I’m pleading with you all, the children who see these things on the internet, that’s the work of the devil so you shouldn’t try it”.

Since news of this challenge began circulating, there have been a few deaths in the U.S. including that of a 15 year old male from Buffalo.

Recognising the immense danger involved in the act, popular social media site Facebook has taken vigorous and active steps to remove any videos of the challenge posted on their site.