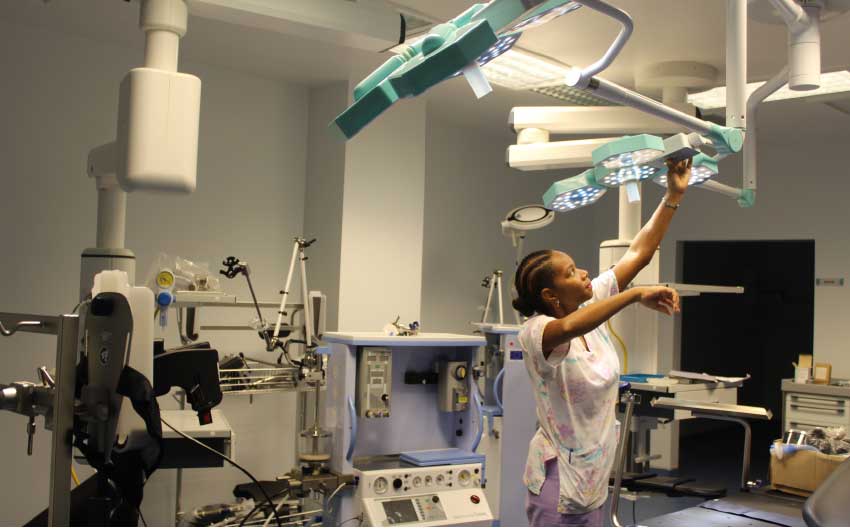 THE outside assistance government wanted for a smooth transition from Victoria Hospital (VH) to the Owen King European Union Hospital (OKEUH) may not have materialized, however this has not prevented the over 500 members of staff of the old hospital from really relishing the move, seeing that such a move will not happen again in their lifetime.

Media personnel Thursday were taken on a tour of the OKEUH to witness the preparations taking place there for Friday’s transition and to view the equipment being installed and the readiness of the various departments to accept patients.

Several of VH’s staff members were enthusiastic about the transfer, contrasting the two hospitals in their enthusiasm, determined to make the transition as smooth as possible and taking measures to ensure that COVID-19 was not part of the transition.

“It is really exciting to see that an event we have planned for so long, worked so hard towards and have had so many ups and downs with is actually coming to fruition,” Nursing Director Ruth Regis said.

“We are really privileged to be part of this. It is something not many nurses get to be part of in their lifetime, the moving into a new hospital so we are really, really excited,” she added.

“The excitement on the ground is amazing. We may be physically tired, but we are so motivated to do this. It’s definitely happening this time,” Regis said.

Said one nurse,” Generally everyone is excited. We have been hearing of moving for some time now but we never actually moved. But this time around when we realized this was happening for true, we had just a few days to set up a new surgical unit.”

Yet another said it was time to move from VH because its structure was falling apart and that really and truly it was time the country took advantage of what was gifted to it, meaning the OKEUH.

“I am very excited about this move in terms of patients’ care. Coming into this new facility will allow us to afford a lot more comfortable and a lot better patient care. It’s true its under strenuous circumstances. But maybe that is God’s blessing,” said another member of staff.

All of the 526 employees of Victoria Hospital will be moving over to the OKEUH, according to the hospital’s Executive Director Nancy Francis. She explained that with the Victoria Hospital’s transformation into a respiratory hospital, staff will work on a shift system to ensure both hospitals are covered.

Francis said that from a management perspective certain policies and operating procedures will be implemented and what’s in existence will be strengthened to ensure that the services the hospital provides to the public are of the highest quality.

But will there be a need for additional staff seeing that both the OKEUH and VH will be in operation at the same time?

“Definitely,” said Francis, “The clinical team as well as the support team will increase and we are working with the relevant agencies to make sure that it happens,” she added.

The OKEUH is packed with new equipment that the nurses say they have had time to familiarize themselves with, even undergoing long hours of training sessions to help them get used to the machines and working with the University Hospital in Martinique to assist them in building their competence level.

As one nurse explained, “As you go around, you will see the level of motivation in our nurses. Everyone knows the plans, they know exactly what is required to prepare their units, they know what checks to do. They are just waiting for that moment.”