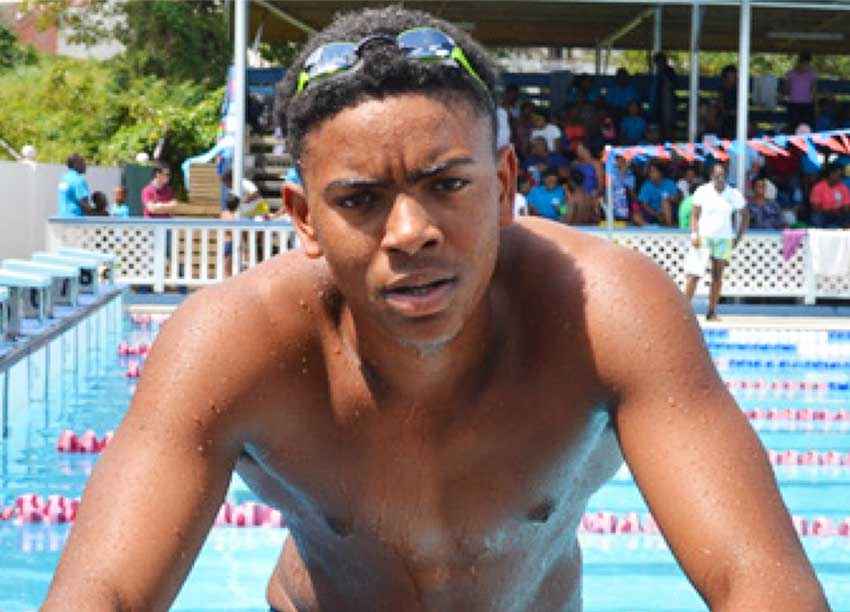 SEVENTEEN-year-old Jayhan Odlum-Smith, one of Saint Lucia’s leading male swimmers will be leaving the island on Thursday 14th November 2019 following the 29th edition of the Organization of Eastern Caribbean States (OECS) Swimming Championship in Saint Vincent and the Grenadines. Jayhan, a second year student at Sir Arthur Lewis Community College (SALCC) will take up a 10 month swimming stint at Azura Swim School in Florida, USA.

The school is recognized as the USA’s top swim school, offering a high level of swimming programmes, and Jayhan will be under the watchful eyes of highly acclaimed Italian coach, Gianluca Alberani.

The 10 month stint is the second for Saint Lucia from swimming world governing body, FINA; the first being former Swimmer of the Year Katie Kyle. Katie is currently studying at Plymouth College in England where she is focused on both swimming and academics.

The Saint Lucia Aquatic Federation (SLAF) took the advantage when FINA announced the 2019 -2020 programme and sent in an application on behalf of Jayhan.

According to the SLAF, the swimmer is very disciplined and dedicated and is deserving of an opportunity to help him advance in the sport.

The VOICE spoke to SLAF President, Eddie Hazell, about this latest achievement who expressed that the SLAF was “elated”, as it was “all about development of our young athletes.”

Hazell added, “He has received a huge opportunity given to him on a golden plate; he now has to run with it. SLAF could only do so much. He is deserving of this opportunity and it’s all left to Jayhan and how badly he wants to excel. As an organization, we may not be saying much, but the results are showing.”

The VOICE also spoke to the President of the Seajays Swim Club of which Jayhan is a member, Robert Blanchard, who said, “Our entire membership of the club was elated with the news of this award to our most promising swimmer. We all wish Jayhan all the best and success as he continues to reach for the top.”

Jayhan’s mother Jackie Odlum-Smith, former President of the Seajays Swim Club, and Jayhan’s biggest fan and supporter told the VOICE in an exclusive interview, “It’s a great opportunity for him; he has worked really hard over the last year with his eyes set on Tokyo 2020. It will give him a chance to train with swimmers that have the same focus and goals. He will also get more time in the pool and train in a 50 metre pool which he doesn’t have here in Saint Lucia,” she noted.

According to his mother, right now Jayhan is concentrating on the 29th edition of the OECS Swim Championship in Saint Vincent and the Grenadines scheduled for next weekend. He has expressed thanks to the SLAF for affording him the opportunity to excel. He also thanked his coaches, Brian Charles, Norman Banfield and John Mc Lennon for giving of their time during training.

Jayhan also set an Age Group Record at the FINA World Championships for the 50 metre fly and 100 metre fly (long course) in July in Korea.