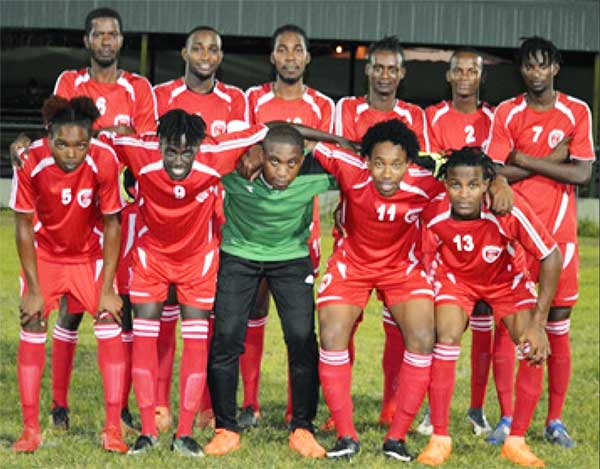 On Saturday evening in the first encounter Dennery defeated Central Castries 1 – 0, a goal scored by Jamie Prospere in the 28th minute of play. Despite several attempts to goal at either end of the pitch by both teams no further goals were scored at the end of regulation time.

In the second encounter, defending champions Marchand got the upper hand against Canaries with a Lincoln Phillip brace in the 26th and 90th minutes to prevail 2 – 0.

After a goalless first half in the first encounter where Mabouya Valley had the better of the exchanges, they returned in the second half to defeat Roseau Valley 1 – 0.

The winning goal was scored by Vernon Abbott in the 51st minute.

In the final game of the evening Gros Islet stunned the 2019 Blackheart knockout champions Vieux Fort South with two early goals in quick succession from which VFS never recovered as Gros Islet went on to win 2 – 1, both goals coming from free kicks.

Nicholas Lawrence opened the scoring for Gros Islet in the 9th minute and two minutes later Melvin Aurelien made it 2 – 0.

VFS captain Jamil Joseph reduced the deficit in the 30th minute as the half ended 2 – 1.

Despite the exploits of both teams at either end of the pitch in the second half no further goals were scored as the game ended 2 – 1 in favour of Gros Islet.

Head coach of the VFS team Emmanuel Belase spoke to the VOICE about his team’s shocking defeat at the hands of Gros Islet.

“I think the game was keenly contested,” he said. “Not taking anything away from Gros Islet; we conceded two early goals both of which came from free kicks”.

He continued, “We didn’t do enough marking in the penalty area which resulted in these two goals. We also squandered about five simple opportunities.”

According to Belase, “That’s the nature of football. I won’t fault my players except for allowing the defense free headers for the two goals. We have five more goals to deal with and that’s our concentration for now, one game at a time.”

Asked whether VFS took the northern team Gros Islet for granted coming on the heels of winning the 2019 Blackheart Knockout tournament Belase replied, “It’s just a matter of not converting the opportunities. These are two teams from last year which have been gunning for each other. They have gotten the better of us in the Island Cup, 5 – 1 and 2 – 1. But we are not down and out. That tournament has no front runners yet. There are five more rounds for everyone so the battle is wide open.”