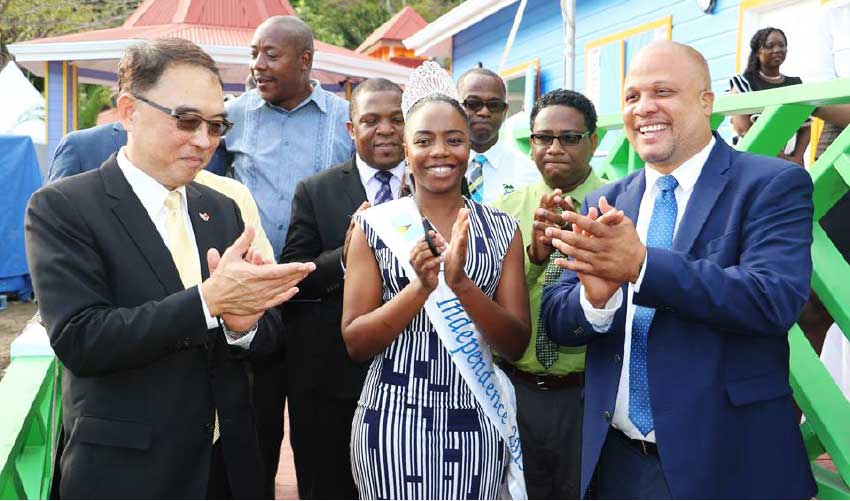 A series of government projects is changing the face of Soufriere and positioning it to finally fulfill the tremendous potential that has been attributed to it for decades, and at the same time restoring its historical status as Saint Lucia’s second town.

A few weeks ago the latest addition to the Soufriere infrastructural landscape was opened: a magnificently upgraded town square which is itself a historical landmark, going back centuries.

Work on the Square started early in 2016, but when the new government of Prime Minister Honourable Allen Chastanet came into office later that year, it ordered a redesigning of the project since it was felt that what was being done lacked imagination for a destination that had been such an important part of the island’s rich history.

Once referred to as “the bread basket of Saint Lucia” for its immense contribution to the island’s agriculture, Soufriere fell on hard times after the collapse of its copra factory that had sustained livelihoods for hundreds of the townspeople for decades. Tourism became the major economic activity but there were always concerns that the benefits of the industry were not benefitting the ordinary man and woman enough.

Still Soufriere’s popularity remained intact with its dive sites, waterfalls, Sulphur Springs, botanical gardens and luxury hotels along with the eminent position that Soufriere has won for itself as Saint Lucia’s tourism capital and home of a World Heritage Site that embraces the towering twin Pitons.

In recent times, development in the west coast town has been moving at an increasingly high rate with a newly built Hummingbird Beach Park, a farmers’ market and bus terminal at the redeveloped “Old Trafford”, and the just officially opened Square. Major refurbishment has been undertaken at the Sulphur Springs, and work is underway to transform the Soufriere Mini Stadium into a world class football and track facility approved by both FIFA and the IAAF, with basketball and netball courts and a 25 metre swimming pool.

Meanwhile land has been secured near Ruby Estate for a cricket field. Elsewhere, some work has already started on major road improvements, as well as the re-establishment of the Esperance to Diamond road.

Says Prime Minister Honourable Allen Chastanet: “The plan that we have for Soufriere is encompassing many different angles, not just for tourism but also for the local residents, and for Soufriere to become a major economic driver on the western side of Saint Lucia”.

It’s all part of the government’s agenda of creating “a new Saint Lucia”. The aim is to redistribute the development of the country to create equity among the towns and villages. Says Prime Minister Chastanet: “It is the government’s intention to give to this town the same kinds of facilities and opportunities that are enjoyed by our people in other parts of the island, especially the capital, as we continue to bridge the social and economic gap that has been glaring in our country for so long”.

With family ties in Soufriere, and an attempt to become the parliamentary representative for the town in the elections of 2011, PM Chastanet admits that he is partial towards Soufriere and that is why its neglect over the years irks him so badly.

He recalls: “Politically you have a constituency that has for four consecutive terms, or 20 years, voted for St Lucia Labour Party (SLP) candidates. What’s more, in three of these terms SLP was in office. We can now look definitively in hindsight and say emphatically that the SLP had no vision for Soufriere and even if they did have any vision they could not implement”.

He adds: “This is not only the case in Soufriere but throughout the country. Our party has recognized that we cannot only focus on Castries. In the first term we wanted to concentrate on Gros Islet, Rodney Bay, Castries, Soufriere and Vieux Fort to improve the facilities and capacity, and to have a vision for those areas. In Soufriere we recognize the potential and have dubbed it as the Eden of the Caribbean”.

Even with tourism as Soufriere’s main economic driver, Chastanet contends that the benefits have not been trickling down and vows to change that, adding that despite being the home of some of the most prestigious resorts in the world (AnseChastanet, Ladera, Fond Doux etc.), very few tourists had made any kind of footprint in the town.

The new Soufriere Square is a much improved version of what was originally conceived. It incorporates the history, culture and narratives of Soufriere. It features green spaces, park benches and fountains. The centrepiece is the Freedom Monument, sculpted by Saint Lucia’s Ricky George which has been sitting in storage for over 20 years and has now finally found a home.

Says Prime Minister Chastanet: “In understanding the statue and what it represented we could not think of a better place for it than Soufriere. Unveiling it and opening the square on the eve of Emancipation in Soufriere could be no less fitting”.

The renovation of the Soufriere Square was funded by the Government of the Republic of China (Taiwan) under the Constituency Development Programme, which is financing several other projects in Soufriere and other districts, creating employment and economic activity.

Counsellor Bill Huang, Chargé d’Affaires at the Taiwanese Embassy here, speaking at the Square’s opening ceremony made the point that the project would not have come to fruition were it not for “the relentless efforts and dedication” of the Prime Minister and MP Herod Stanislas, adding: “I believe there are more opportunities and we can come back here for more projects…..”.

Stanislas was also beaming with excitement. He said: “I am extra proud and happy that we have been able to deliver…. a state of the art facility in the heart of Sulphur city and I believe that you the people of Soufriere ought to feel equally proud to have such a facility right here in downtown Soufriere. The new design should enhance Soufriere’s sense of place, be memorable and appeal strongly to the emotions of both visitors and locals. ”

Meanwhile, there are plans to continue upgrading the facilities at the Sulphur Springs which has been under the ownership and management of the Soufriere Regional Development Foundation (SRDF) since 1996. The government is also considering various ideas for the reopening of the copra factory and feeder roads are being reopened for agriculture and also for rainforest tours in the areas of Fond St. Jacques. With the expectation of a cruise ship port in Vieux Fort, the government believes there will be need to expand and add more attractions to the southwestern belt from Canaries to Vieux Fort using the experience the SRDF has gained over the years in this line of business.

Stanislas says the government is acquiring land for a new Soufriere Hospital on Sir Arthur Lewis Street and hopefully construction will begin later this year.