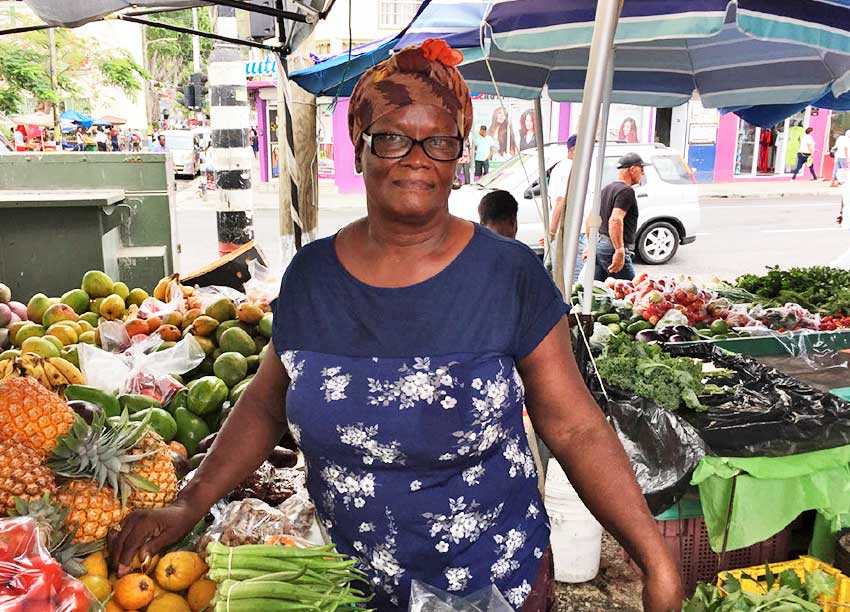 In preparation for the commencement of phase one of the redevelopment project of the Castries Market, provisions vendors on the morning of Monday 27th May, relocated to the former site of the Fire Service Headquarters. Most vendors were given a stipend of $500 from the Government to assist with the cost of relocation.

On Wednesday May 29th, the early-morning provision vendors continued to express how pleased they were with their new surroundings. Jane Joseph, a well-known vendor, said that she liked the new site very much. “The place is neat and the air is fresh,” she began, “there are no rodents or flies about the place and there is lots of space for everybody.” Jane reported that business has been favourable since she moved to the new location. “I don’t know for later but it’s good for now,” she remarked.

Vera James known by most simply as ‘Shabin’, another provisions vendor, expressed her satisfaction with the temporary vending site. “There is more room for vendors and customers to move about. This place is so much better than where we were before, but I’m looking forward to the new market which will be far better than the old.” Vera expressed her gratitude for the Prime Minister, Allen Chastanet, who paid vendors a visit the day before to see how they had been getting on at the new location.

As much as some vendors were pleased about the temporary change, there were others who were disgruntled about it. Provision vendors who set up shop on afternoons near the Jeremie Street Plaza on Jeremie Street were upset when they too were asked to relocate to the new location. At approximately 1:30 pm on Monday May 27th, a small gathering of discontented vendors embarked on the entrance to the craft market on Jeremie Street in protest against the situation. The vendors claimed that they were told by police the day before that they were forbidden to vend in the usual spot and therefore had to move to the new location. Provisions vendor Rita Pierre also known as ‘Geraldine’, said that she did not see the need to move. “We are not bothering anyone where we are. Where we are vending right now is not under construction so I don’t see why we have to move” she remarked.

Geraldine noted that the change would greatly reduce the profitability of vendors who come to sell on Jeremie Street on afternoons, as they would have to seek vending spots all the way in the back of the new location. She also stated that they would have to wait until after some of the early morning vendors have left before they can make use of the venue. “They did not cater for us and I am greatly disappointed in the Mayor for not doing something about it,” Geraldine said.

Another provisions vendor, Carlin Felix, also expressed her disappointment. She declared, “They told us that we cannot sell our provisions in front of the market and that we have to go and look for a spot all the way in the back of the new place. How do they expect all of us to fit there? That place cannot take all of us. Besides, when people come to buy from us, they stop their vehicles right there and quickly buy their provisions. When we go all the way to the back, customers won’t come to look for us.”

The provisions vendors said that the situation was bad enough already, and that they expect it to be a lot worse on Saturday when all provisions vendors will come to sell at the same time. “I want to know what they will do when all these vendors start to hustle for a spot in that little place,” a vendor who wished to remain anonymous remarked. “There’ll be a war inside,” she concluded.