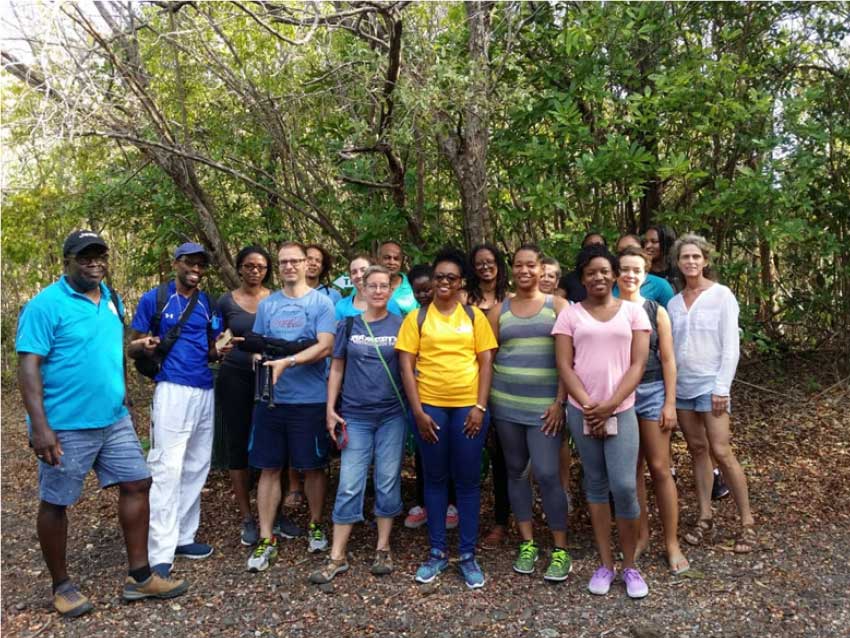 International Earth Day is a global event observed each year on April 22nd. According to the Earth Day Network, the organization that leads Earth Day worldwide, millions of people from across the globe participate in what is considered the largest civil focused day of action.

Saint Lucia was not left out, as the leading non-governmental environmental agency on island, the Saint Lucia National Trust (SLNT) along with other partners organized a series of events the weekend of April 27-28, 2019. The activities kicked off at the Pointe Sable Environmental Protection Area (PESEPA) on the morning of April 27th with a beach clean-up and restoration of protected barriers. These barriers, which were also repainted, were initially installed to lessen the impact of negative activities such as unregulated vehicular trespass and sand mining. These illegal acts have a harmful effect on this area which serves as a habitat for many species and a nesting area for marine turtles. It also destroys coastal vegetation and sand dunes which are important, as they act as a natural protective barrier trapping deposited sand particles. According to the SLNT Programme Officer – South, Craig Henry, “The activity sought to sensitize persons to the importance of coastal ecosystems and the services they provide including habitat shelter and coastal protection. The activity presented an opportunity to improve community involvement in conservation works within the PSEPA, and we are grateful for the assistance received from Mrs. Silvina James, Acting Sergeant 562 of the Community Relations Branch Southern Division of the Royal Saint Lucia Police Force, and for the involvement of 22 youngsters from the Rising Stars Police Youth Club, accompanied by their parents. Additional support was received from Massy Stores South employees, SLNT staff and members.”

Meanwhile, on April 28th participants gathered for a pre-dawn walk at Morne Pavillon, Cap Estate. This 22-acre parcel of land bequeathed to the National Trust presents spectacular vistas of Rodney Bay, Pigeon Island and Martinique on a clear day. However, the day’s activity sought to introduce participants to the rich diversity of species found only in this area.  According to Adams Toussaint, former Chief Forestry Officer and SLNT Member who served as a guide on the occasion, “Morne Pavillon is a prime example of a tropical dry forest evident by the deciduous plants abundant in the area. Dry forest is one of the most endangered habitats on island as most persons consider it to be useless vegetation. On the contrary, it is just as important as the rainforest. While 15 percent of our forest is dedicated towards preserving our rainforest, our tropical dry forest only accounts for 1.5 percent and continues to be under threat from urban, touristic, industrial and agricultural developments.”

Mr. Toussaint, currently employed with Flora and Fauna International, enlightened participants on how they can contribute to the conservation of various species by practicing ex situ conservation. An example, he explained, is to incorporate dry plant species into one’s immediate landscape/garden. He continued, “Our natural heritage areas should be protected otherwise we would be at risk of losing our species.” He thanked the Morne Pavillon donor and commended the Saint Lucia National Trust for the work being undertaken to protect the area.Immediately following the pre-dawn walk, a clean-up activity along the Cap Estate Highway to Robert Devaux Drive got underway with volunteers from the SLNT membership and staff, Peace Corps Eastern Caribbean, Japan International Cooperation Agency (JICA), Massy and Keep St. Lucia Clean and Green. In the end, 11 large bags of waste containing micro plastics, bottles, food containers, car parts, and various metals and plastics were collected. According to Peace Corps Volunteer, Jamelyn Ebelacker, “The work being accomplished by the volunteers continues to make a positive impact in our communities and the environment, as garbage strewn all over the place ultimately ends up polluting our rivers and bays causing harm to our marine species.”

Activities culminated with Sòlèy Kouché at the Soufriere Waterfront spearheaded by SLNT’s Western Chapter members. In keeping with the theme, Nadia Cazaubon from Caribbean Student Environmental Alliance (Caribbean SEA) set up a mini photo exhibition depicting Saint Lucia’s indigenous species, and hosted an interactive discussion with participants on their knowledge of these species. Participants were presented with challenges and rewarded with prizes donated by Caribbean SEA and Saint Lucia Marine Management Association Inc. (SMMA). The ceremony also featured poem recitals, singing and the recital of the Earth Day Pledge. An added feature was the presentation of a token of appreciation from the SMMA to SLNT Life Member and former SLNT Councilor, Simone Mondesir for her many years of yeoman service to the community and as an advocate to environmental causes. To close off the day’s event, students distributed bumper stickers and interacted with passers-by on the significance of the short but important ceremony.

The Saint Lucia National Trust is grateful for the financial support received from Massy Stores Saint Lucia through the Environmental Fund and their team members who assisted in the activities. Thanks also go out to The Landings, Peace Corps Eastern Caribbean, Greening the Caribbean, SLNT Councilors and members for their support.

International Earth Day 2019 was observed under the theme, “Protect Our Species.”