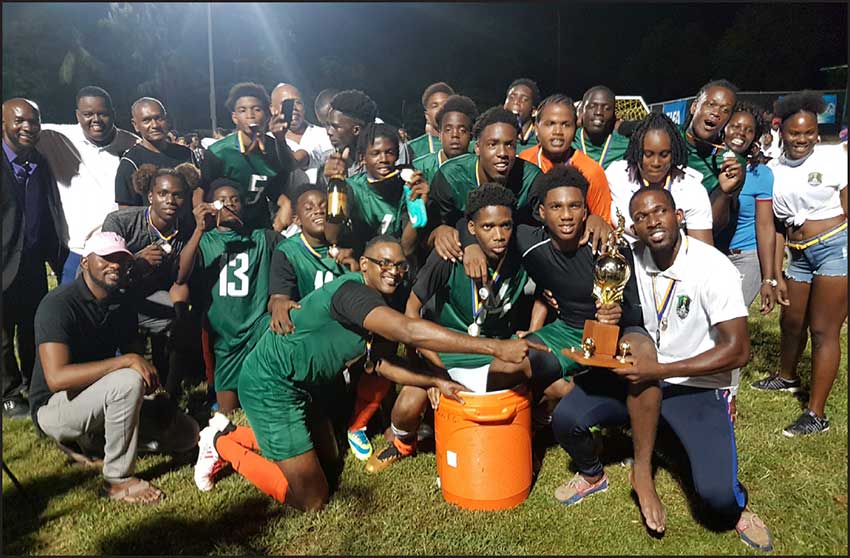 After a hiatus for two years, New Generation FCemerged champions in the 2019 Hon. Ezekiel Joseph/Babonneau Football League championship when the curtains came down on Saturday May 4th at the Fond Assau Playing Field. Despite a persistent down pour, hundreds of football enthusiasts turned out to take in the showpiece.

When play resumed, both teams upped the momentum a few notches, but by the then the crowd had doubled. In fact, close to 75 percent of the fans who came to support were in New Generation FC’s corner.

On the pitch, Lionel was back on the score sheet for the second time of the evening when a New Generation FC player was fouled. Referee Nigel Mathurin wasted no time as he immediately pointed to the penalty spot only for Lionel to dispatch a well taken right footer that eluded the Bright FC goalkeeper in the 52nd minute (2-0).

Bright FC pulled one back in the 59th minute via the penalty spot which captain, Kissenger Anthony clinically put away to make it 3-1.

For Bright FC, despite several scoring attempts, New Generation FC defence stood tall up until the final whistle of the referee.

Asha Julien put Allied Forces/RSLPF in the lead in the first half giving them a 1 – 0 advantage up until the halftime whistle.

On the resumption, Bogius FC upped the tempo only for Tarik Delaire to score twice to seal victory for his team; the second goal a brilliant free kick in the final minutes of the encounter took his goal tally to six, the most in this year’s tournament.

MVP of the Final, Raheem Lionel said, “I am feeling so happy, and everything just went into my head. It’s the first time winning a final. The last time we played a final we lost, but this time we came out stronger and better.”

Lionel thanked his teammates, his coach, his family and the New Generation FC supporters that turned out in large numbers for helping to make their win possible on the night.