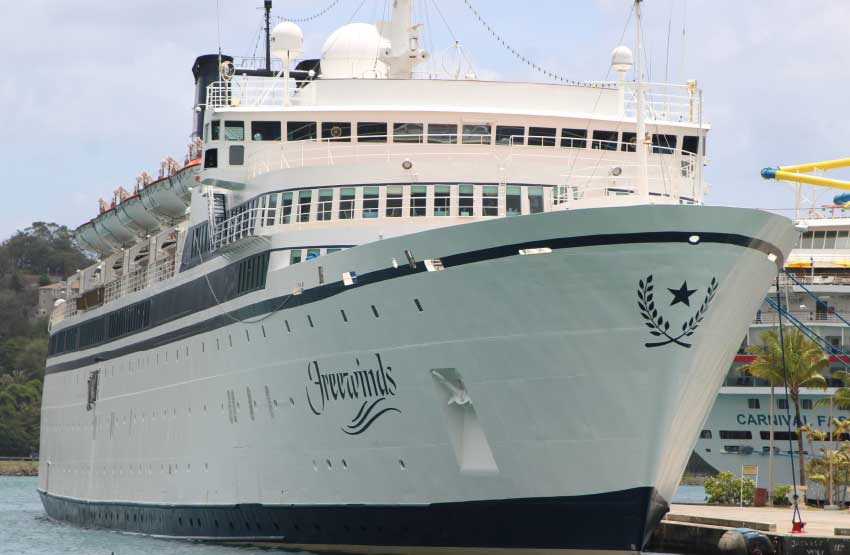 Dr. James who yesterday fielded questions from THE VOICE said the vessel had already berthed in Port Castries when news of a passenger with the measles disease reached her office.

“The Office of the Chief Medical Officer became aware that there was a confirmed case of measles on the vessel, when we were alerted by our acting National Epidemiologist, who is also the country’s International Health Regulations (IHR) Focal Point. The message had been communicated to our IHR Focal point, from the IHR Focal Point in Curacao. By that time, the ship was already docked at port,” Frederick-James said.

She added, “The Ministry’s response was guided by the Public Health Act, the Quarantine Act and our Epidemiological procedures. Given the highly infectious nature of measles, I believe that our decision to Quarantine the ship was sound legally and according to good Public Health practice.”
Sponsored | Article continues below

“Given the highly infectious nature of Measles, along with the possibility that other persons onboard the vessel may have been in contact with and are now possibly infectious due to this disease, a decision was made not to allow persons to disembark. This decision to Quarantine the ship is in keeping with the health laws of St. Lucia,” Dr. James said.

The vessel entered Port Castries on Tuesday of this week and was immediately quarantined. It left Thursday night for its home port in the Dutch Caribbean, but not before the Department of Health issued 100 doses of the measles vaccine to the ship’s doctor, which was requested. The vaccines were supplied at no cost to the vessel.

“We recently received a new supply of the vaccine against measles. We now have more than sufficient vaccines for our children who are routinely immunized against measles. We also have sufficient to provide boosters to front line workers. Supplying 100 doses to the ship was necessary to protect persons on the ship who had been directly exposed to the infected crew member. It also assisted the ship in meeting the requirements to facilitate its onward journey,” Dr. James said.

She informed Saint Lucians that currently there are large measles outbreaks in many countries that they travel frequently to, and from which Saint Lucia receives visitors, adding that an outbreak is possible in the near future, whether from a citizen who travelled, or from an infected visitor who arrives by air or sea.

“Hence, it is important that persons ensure that their children, in particular, receive the measles vaccine according to the normal immunization schedule,” Dr. James said.

She noted that measles is spread through droplets from the nose, mouth or throat of infected persons who cough and sneeze and that early symptoms include high fever, runny nose, red eyes, and tiny white spots on the inside of the mouth.

“A rash may then develop, starting on the face and upper neck and then spreading throughout the body. The disease can be particularly severe in young children who are not immunized,” Frederick-James warned.

The Freewinds vessel may have departed Saint Lucia but the monitoring and surveillance of the disease continues by officials of the Health Department.

“Notwithstanding the ship’s departure, the Department of Health and Wellness continues surveillance and close monitoring of local officers who may have boarded the ship during interventions whilst in port,” Frederick-James said.

According to her the island’s public health response is being coordinated with other local agencies and partners and the country remains in discussion with regional and international health agencies such as the Pan American Health Organization (PAHO) and the Caribbean Public Health Agency (CARPHA).

Meanwhile the Department of Health is lauding the success of Vaccination Week which has ended with a health fair on the Dennery Police Station grounds, promoting the importance of vaccination and healthy living.

The week was celebrated under the theme, ‘Protect Your Community, Everyone Do Your Part.’ The Department of Health has since called on Saint Lucians to avoid listening to the negatives about vaccination and understand that vaccination is important and needed for a healthy nation.