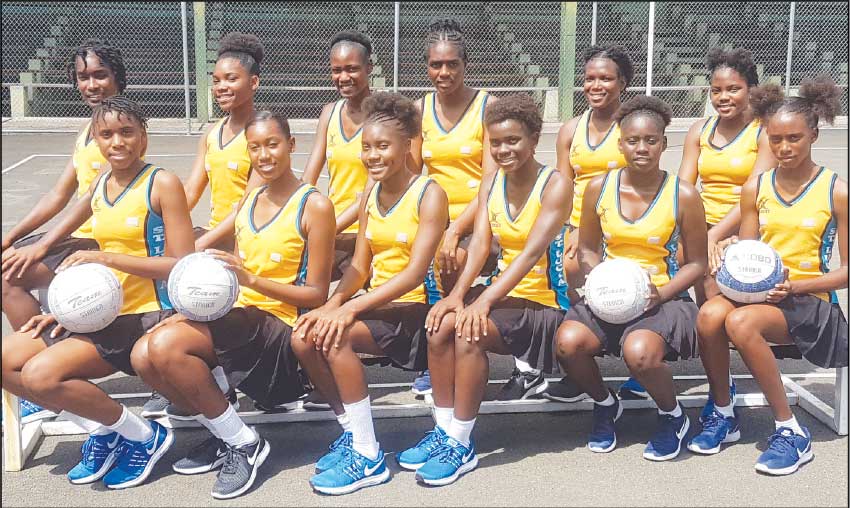 The two teams started out slowly, only scoring a combined total of 11 goals; Saint Lucia 8 and Antigua and Barbuda 3. At the halftime whistle, Saint Lucia led 19-5.

In the third quarter, Saint Lucia literally shut out the Antiguans when they

switched into high gear scoring 10 points to Antigua and Barbuda 1.

The final quarter was all Saint Lucia as they dominated the host scoring 14 points to Antigua and Barbuda’s 2.

On Monday 8th, Saint Lucia made one change to its starting lineup which played Antigua and Barbuda, bringing in Trenice St. Croix in place of Tancy Pascal Matthew (Goal Shoot). The Saint Lucians had to pull all stops to defeat arch-rivals Grenada 23-22 in a nail-biting encounter at the YMCA despite a wet court following early morning showers.

Quarter scores: Saint Lucia 4, Grenada 2; Grenada went ahead by 1 in the second to lead 10-9; the ding dong battle continued as Saint Lucia bounced back to lead by 1 (17-16) in the third. They managed to maintain that 1 point lead up to the final whistle winning 23-22.

For the Grenadians, K. Andrew (Goal Shoot) scored 26 from 15 attempts and Celina Brown 7 from 7 attempts.

In another match played in the morning, Barbados defeated Bermuda 41 -11.

“Bermuda, because of how they played against Grenada, we can’t underestimate any team even if we have beaten them in the past,” she noted.

Maxwell said, “The first game against Antigua and Barbuda was an easy win. The game versus Grenada we played on a wet court everyone was scared of falling, it was rather sloppy.”

Today, (Tuesday 2nd) the Shooting Competition commences at 4.00 p.m., while from 6.15 p.m., Saint Lucia plays Trinidad and Tobago; the Commonwealth of Dominica takes on Grenada at 6.30 p.m. and Antigua and Barbuda play Bermuda at 7.15 p.m.

Tomorrow, (Wednesday 3rd) Saint Lucia takes on the Commonwealth of Dominica at 6.15 p.m; Barbados plays Grenada at 6.30 p.m. and Antigua and Barbuda go up against Trinidad at 7.15 p.m.

The curtains will come down on Thursday 4th when Grenada plays Trinidad and Tobago from 5.30 p.m., Bermuda comes up against the Commonwealth of Dominica at 5.45 p.m. and Barbados plays Saint Lucia at 6.45 p.m.

The last time Barbados and Saint Lucia played each other was 2018 at the Vigie Multi-Purpose Court where the game ended in a tie 27-27. So it’s all to play for on the final night of competition. Also in 2018, Saint Lucia placed second and Barbados third.