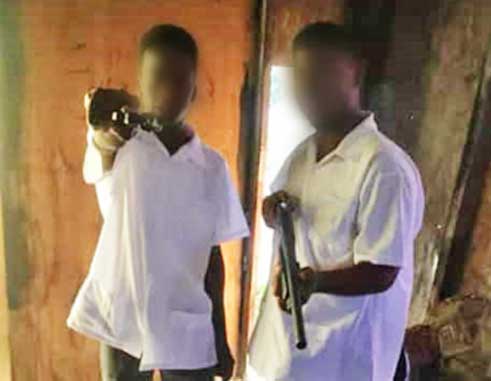 The Royal St. Lucia Police Force has expressed concern and an investigation should begin over a photo that has gone viral.

Two boys who are pictured in full secondary school uniform are seen posing in a room equipped with a sofa with what appears to be firearms (a hand gun and shot gun).

According to a police source, “if an individual is caught with a firearm or ammunition, the penalty for the above mentioned offences are $15,000.00 or up to seven years in prison.”

The source explained that a firearm is “a lethal barreled weapon of any description from which any shot, bullet or other missile can be discharged. It includes, any accessory to any such weapon designed or adapted to diminish the noise or flash caused by firing the weapon and that includes a homemade gun. Ammunition is the projectile with their fuses, propelling charges, or primers fired from guns; cartridges; explosive military items (such as grenades or bombs)”.

Students were also warned that the age of criminal responsibility is from 12 and that they can be arrested and prosecuted if they fall between the ages of 12 to 16 as a juvenile. Once they’ve turned 16, they can be tried as an adult.

Saint Lucian police recently registered two homicides for the year, one of them as a result of a shooting.