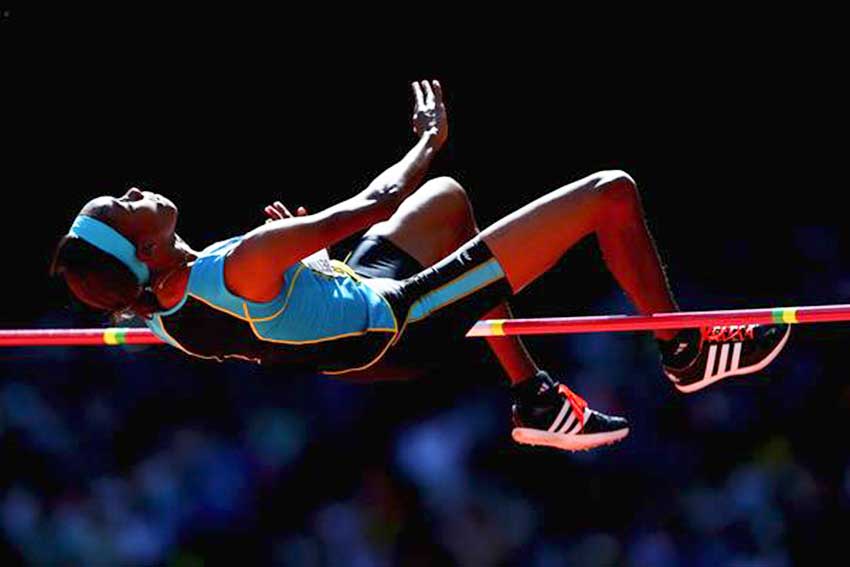 SAINT LUCIA’S most decorated track and field athlete and multiple-times sportswoman of the year, Levern Spencer, graced the podium yet again as she demonstrated her prowess as a world class high jumper, by ending what can best be described as a “Prolific” 2018 season with another medal winning performance at an international track and field meet.

This time around she was representing the Americas at the prestigious Continental Cup in Ostrava, Czech Republic, a championship held every four years. Spencer soared over the bar at 1.93 metres to win her second bronze medal in that championship, after winning her first in Split, Croatia in 2010.

She was the only female athlete from the Organization of Eastern Caribbean States and her third consecutive time qualifying to represent the Americas in this competition.

The event was won by World No.1 Mariya Lasitskene representing Europe with Svetlana Radzivil, Uzbekistan’s No.1 winning the silver medal.

Other than victory by Mariya Lasitskene it would be a major upset in any high jump competition. The world and European champion has lost just one out of her last 50 competitions, and she maintained that record in Ostrava with another decisive win. Her mark of 2.00 metres marked the sixteenth time this year that she has cleared the two-metre barrier.

Lasitskene’s victory was never much in doubt, as she was in the lead throughout the competition. By the time the jumpers finished with attacking 1.93 metres, there were only three left, and the favourite was the only one with no misses up to that point. The others to clear that height were Levern Spencer of Saint Lucia and Svetlana Radzivil of Uzbekistan, having done so in the second and third attempts, respectively. Going out at that height was the second representative of Europe, Germany’s Marie-Laurence Jungfleisch.

Moving on to 1.95 metres, the Asian champion Radzivil was the first to clear, but her jump was immediately followed by another first-time clearance by Lasitskene. Spencer failed twice and decided to pass her remaining attempt on to 1.97 metres.

Spencer one jump at that height turned out to be unsuccessful, which meant she was certain to finish in third. Both Radzivil and Lasitskene also failed on their first two jumps, but on the third, Lasitskene, last in the jumping order and already assured of victory at this point, cleared comfortably.

With just one woman left, the bar went up to 2.00 metres and this time Lasitskene only needed one jump to clear, again by some margin. It was only in attempting 2.05 metres, a would-be world lead and Cup record that she had to yield.

Europe’s first and fourth place in this event meant maximum points for their team, proving captain Colin Jackson’s decision to use a joker in the event was well founded.