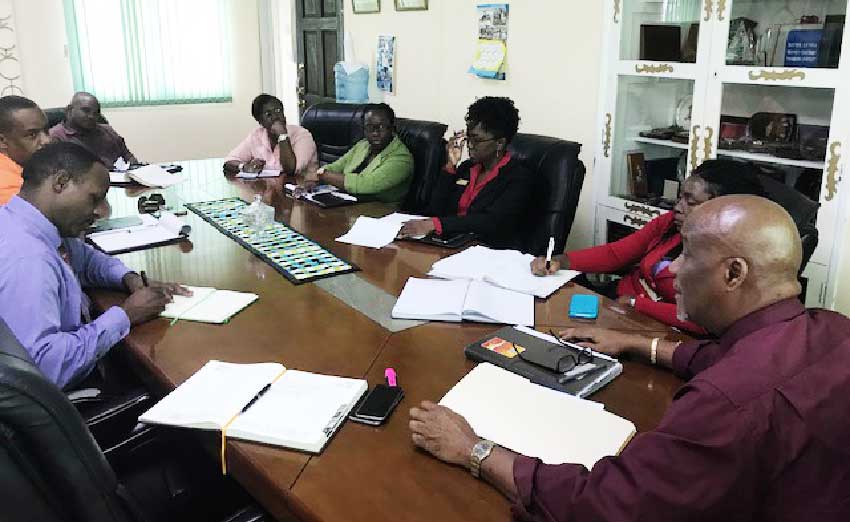 PRESS RELEASE – Mayor of Castries, Peterson Francis, received positive reviews for his efforts at the Castries Constituency Council (CCC) in bringing a sense of order and cleanliness to the city when he met with Chamber of Commerce representatives on Monday at City Hall.

These were the sentiments expressed at the meeting which was part of regular discussions between the two organizations. On this occasion, it was not the Board of Directors of the Chamber alone who met with the Mayor, but representatives from firms that operate within the city.

While it was agreed that there was a lot more work to be done, the initial efforts of the CCC were lauded for the presence of 24-hour patrols by City Police Officers, to the efforts at keeping Castries clean through beautification efforts and attempts to address the bothersome issue of indiscriminate vending on sidewalks.

Mayor Francis updated the Chamber on the level of progress being made with the introduction of parking terminals, although the speed with which the relevant legislation was amended was one risk to be mitigated.

As it relates to waste disposal, the Chamber was informed of a clean city campaign to be launched through the placement of a number of additional garbage bins around Castries, and from a broader spectrum, Council had submitted a bid to the Solid Waste Management Authority for garbage collection in the four constituencies where it was already providing the service at its own cost.

While applauding the Mayor for the work being done, the Chamber observed that the homelessness issue still remained and was negatively affecting the efforts at keeping the city clean as many vagrants were engaged in indiscriminate dumping of garbage around the city and even taking garbage out of bins. The Mayor reminded the Chamber that there was a pending initiative to work with the Rotary Club to provide some services to the homeless which should help alleviate these problems.

The Chamber also informed the Mayor that there remained problems with loitering and loud music outside business-houses as well as insufficient arrangements for the delivery of goods in the city centre. In fact, firms were being given parking tickets when seeking to drop off goods. It was agreed that the Chamber and the Council need to meet with the Transport Board and police on these and related matters as the needs of the business community should be taken into account when amending the traffic legislation and its impact on parking in the city.

In addition, at the meeting, it was agreed that some action was required in the area of public health as it relates to the operations of restaurants in the city and the landing of fish in areas other than the Fisheries Complex.

The Chamber has already invited the Mayor to address the wider Chamber membership in the very near future as there were clearly opportunities for closer collaboration and sharing of insights into improving the operations in Castries.

The Chamber pledged its members’ continued support and cooperation.