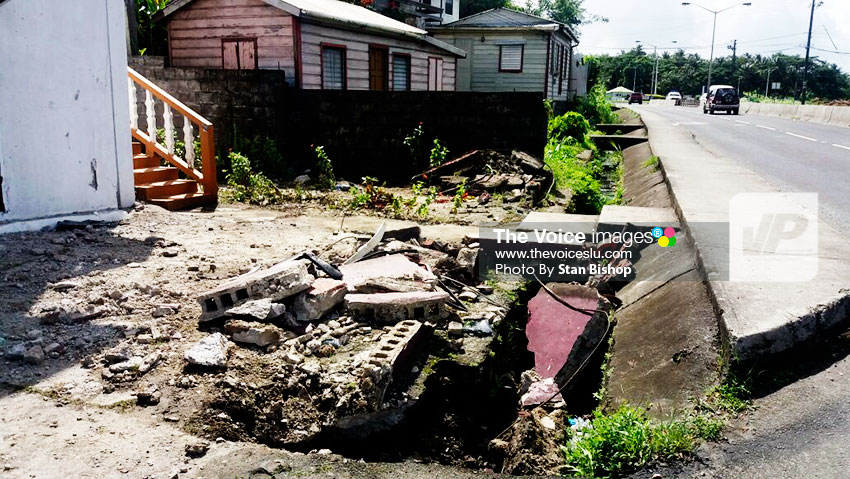 THE car crash last Saturday morning that claimed the lives of two promising teenagers is still causing ripples across social media platforms, the public and even government ministers, with one minister saying the incident has touched him immensely.

Dead are Bradley Cyril, 19, and Brandon St. Omer, 18, both from Beausejour, Gros Islet, and said to be close friends.

The two died when the car they were in crashed on the Vide Boutielle Highway shortly after midnight, according to reports.

Police say they are investigating the circumstances surrounding the deaths and are not in a position to divulge information relating to the cause of the accident at this time.

However, this has not stopped speculations on how the vehicle could have left the road and settled where it did – near the front of a building along Vide Bouteille, a short distance from NAGICO’s office.

Police report that Cyril was the one driving the motor car at the time heading south towards Castries. They say that investigations reveal that the motor car veered off the road and collided into a wall, and that both young men were conveyed to the Victoria Hospital via ambulance, where they later succumbed and were formally pronounced dead by medical practitioners.

But as many of those who are saddened by the unfortunate death of the two men await the results of the post mortem and police investigation, two government ministers have called on parents to educate their children about the dangers of the road and the importance of safe driving.

Hermangild Francis, Home Affairs and National Security Minister, just before entering into a Cabinet meeting yesterday, said that while he sympathises with the parents of Cyril and St. Omer, the point must be made that parents with children entering the legitimate age to drive must instruct them on how to conduct themselves when they are in charge of a vehicle.

“As a government, we need to empathise with the families of these young people. It is really hard when you recognize that these are individuals with a great future ahead of them. It has touched me immensely as one of them was a national footballer, an athlete. I understand how the parents are feeling at this time,” Francis said.

Francis said that parents need to teach their children about the dangers lurking on roads and how they should drive to avoid accidents.

The other minister to express grief and sadness at the passing of the two young men was Fortuna Belrose, who has responsibility for youth development in the country. She told reporters yesterday that the two young men were outstanding citizens of the country and that government sympathises with their families. She, too, called for motorists to exercise due caution while on the road.

“We have a responsibility to do that every day. Every day we go to our vehicle and attempt to start it, we have to consider the fact that we are putting ourselves at risk and be cautious as we drive along the streets of the city,” she said.

“I do not have the facts pertaining to the situation, but the most we can do is implore those of us who are drivers and those young people aspiring to become drivers to drive with caution every time, not sometime,” Belrose said.

Cyril was a member of Morne Stars Athletic Club and is said to have been a talented sprinter. The club wished his friends and family every comfort in their period of distress.

Saturday’s incident brings the number of road fatalities recorded for this year to three.