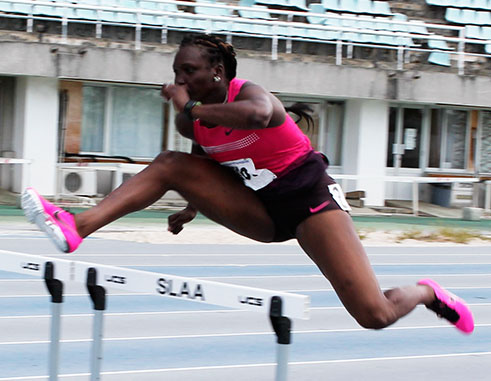 JUST hours after the news broke of Saint Lucia Olympic Committee Inc.’s press briefing to discuss matters pertaining to sports developments among affiliates over the last year, one local elite athlete has stood her ground and spoken out on the statement made by the SLOC General Secretary, Alfred Emmanuel.

At that press briefing, Emmanuel, a veteran administrator, said: “The time has come whereby it is the responsibility of the SLOC to select individuals who we believe can make finals or make a podium finish. When you look at the financial resources that we have put out there, we are telling our members enough is enough. A finals or podium finish at the end of the day (is expected). We have to justify to our international funding agencies the monies that they have given us that we have made available to our members.”

Emmanuel also fielded questions from the media about possible selections and, according to him, though some individuals may have reached the qualifying standards for the Commonwealth Games, the timeframe of this qualification must be considered. He went on to clarify that individuals who may have done so in the past must ensure that the standards would have recently been met.

Meanwhile, responding to Emmanuel’s statement on her Facebook page, MakebaAlcide, a national heptathlon athlete, said, “When we talk about development, this is where a lot of people misunderstand. While it would be great to only send persons who can potentially get on the podium, it is essential that we understand that you don’t just get on a podium by wishing and wanting.

She continued: “When you decide to fund or assist athletes who already have contracts and leave the up-and-coming (if given those similar opportunities would excel), then you are stifling sports development in our nation.

“The conversation always goes ‘St Lucia has so much raw talent’ but the questions I always pose is what are we doing to develop that raw talent?

“Are we not learning from our fellow Caribbean islands that a long-term plan of 5-10 years is key to the development of any sporting discipline?

“In our society, we lose so much talent because of struggles imposed upon young athletes.

“I am in no way saying that athletes are not responsible for themselves but when we as a nation expect the highest level of performance and all we see are podium finishes and nothing more, then where does the blame fall?

“Personally, my biggest development has been outside of Saint Lucia because we do not have the means or facilities or even proper programming in place to even develop a world class athlete.

“Mindoo Philip Park, where most track and field athletes train, is in a horribly poor state and is also a cricket ground. To add to that, the hospidium (hospital/stadium) is in a poor state with flying debris all over the place.

“So, tell me this in 2018, is it fair to say that only potential podium finishes will be sent to championships, no matter if you hit the qualification or not? (I mean what is even the point of the qualification standards)?

“Last point and I shall digress: how do we expect athletes to develop and be prepared for major competition if we cannot send them out to experience that type of competition? Winning locally is easy. Winning regionally or international is a bit more challenging. (Local crowds rarely come out in huge numbers to support sports).

“Anyways, I digress, let’s have a conversation. Speaking for those without a voice, speaking out because everyone else is afraid to, speaking up because it’s about time this conversation starts.

“Disclaimer: I mean no disrespect to anyone and I am merely trying to have a conversation. Speaking mostly for my sport — athletics).”