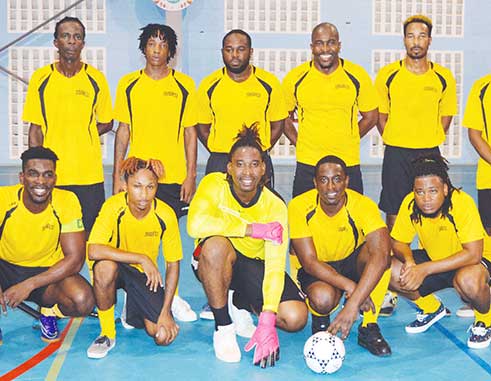 AFTER eight long weeks of intense competition, Windjammer Landing Villa Beach Resort and Goddard/PCD will meet in the grand final of the 2017 Corporate Warfare at the Beausejour Indoor Practice Facility tomorrow. Doors open at 5:30 p.m.

A full house is expected and, like the semifinal round, so, too, would horns and whistles.

For the third place silverware, Sandals will play WASCO from 7:30 p.m., with the winners receiving $1000, a trophy and 20 bronze medals.

Then it’s the big one — Windjammer and Goddard/PCD — scheduled to begin at 8:30 p.m.

The winners will receive the Corporate Warfare Trophy and a cash prize of $3000 and 20 goal medals, while the runners-up will receive $1500, the second place trophy and 20 silver medals.

Meanwhile, there was only standing room available in certain sections at the BIPF at the semi-finals last Saturday. In Game 1, Windjammer defeated Sandals 6-2. Tyson Fedee opened the scoring for Windjammer in the 7th minute, while Ed Joseph made it 2-0 in the 17th to leave the halftime score at 2-0.

On the resumption, Cheney Paul made it 3-0 in the 31st minute, and two quick strikes from the boots of Tyson Fedee in the 32nd and 34th minutes pushed Windjammer further ahead. This was Fedee’s second hat trick of the tournament.

In the 38th minute, the Sandals crowd finally came alive as Vibert Joseph cut the deficit by one. From that point, Sandals appeared to be getting into strides a little too late as Samuel Sepherin scored his team’s second goal in the 39th minute to make it 5-2. But Windjammer quickly regrouped and were still able to score another in the 40th minute via MiandadSoudine.

In the second semifinal, Goddard/PCD rolled over WASCO 4-1. Nye Henry opened the scoring for Goddard/PCD in the 1st minute, while SelenceBathelmy made it 2-0 in the 9th minute.

WASCO’s lead goal scorer, Richard Annius, who came into the semifinal round with 8 goals, scored his ninth of the tournament in the 9th minute to make it 2-1. Despite several scoring opportunities on both ends of the court, Goddard/PCD were still able to enjoy a one-goal advantage at the halftime whistle.

On the resumption, there was no letting up by Goddard/PCD as Nye Henry scored his second on the evening to make it 3-1, while Tristan James’s 33rd minute strike made it 4-1 to secure a final berth.

Lionel John, co-founder for TimeOut Entertainment, organisers for the tournament, spoke to The VOICE about this year’s tournament.

He said, “The level of discipline has been very good. Overall, the officiating has been great from the referees, but still some small areas for improvement. We strive for excellence and take the necessary steps to deliver this consistently. Although challenging, we continue to work hard.”

He continued, “From this year, we dubbed the event “The Best Meeting Ever”, simply because we see the tournament as an avenue where corporate strategy and Saint Lucians can converge in a fun-filled environment, fostering comradery through sports.”