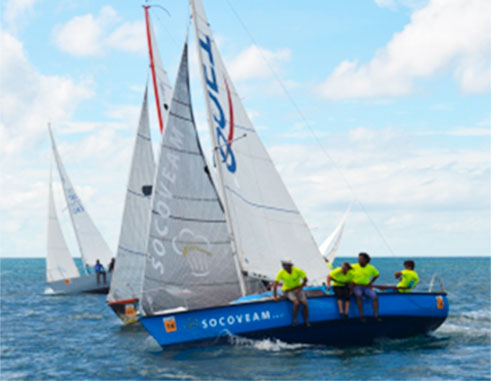 The waters off Reduit Beach will be a hive of activity as the sixth Mango Bowl Regatta sets sail today. According to organizers, the Saint Lucia Yacht Club, close to 25 boats will compete and, like previous years, they expect a few more to sign up at the last minute.

The skipper briefing, final registration and logistics for the event took place last evening at the SLYC headquarters in Rodney Bay.

The event is scheduled to start at 9:00 a.m. in Rodney Bay, close to Pigeon Island, and a full day of activities is on the card for the five classes of boats, which include racing and cruising yachts, and J24/Surprise Class races.

On the heels on what has been dubbed a successful 2017 Flotilla/ARC last weekend, the local organizers believe more local sailing enthusiasts will join Saint Lucia’s largest regatta.

Like last year, the French party will be hot. Grenada and Barbados will be on their heels and so, too, Saint Lucia. Leading Saint Lucia’s charge will be Fredrick Sweeny onboard “Attitude”. Boats such as “Aurora Rose”, “Die Hard”, “Grayling”, “Jabal”, “Digilife”, “La Morrigane” and more are expected to bring some additional thrilling flavour and epic finishes to this year’s regatta.

Also on day one, the winning crew will receive their prizes at the Café Ole Boardwalk at IGY Rodney Bay Marina.

On Sunday, the showpiece will shift into high gear with another series of races in five classes. Following what is expected to be stiff competition on the water, the action will move on land where the winners will be announced at the Saint Lucia Yacht Club.

Up for grabs over the weekend will be a number of Mango Bowl top prizes in the various categories where handcrafted bowls will be presented.

All day Saturday and Sunday, sailing enthusiasts can take in the action at the SLYC or the Reduit Beach.

By all indications, it looks like the Mango Bowl Regatta will continue to put Saint Lucia’s yachting and sailing industry on the map.

The SLYC says it is thankful for the various sponsors who came on board this year, including BodyHoliday and Spa, which contributed $10,000 towards the event.