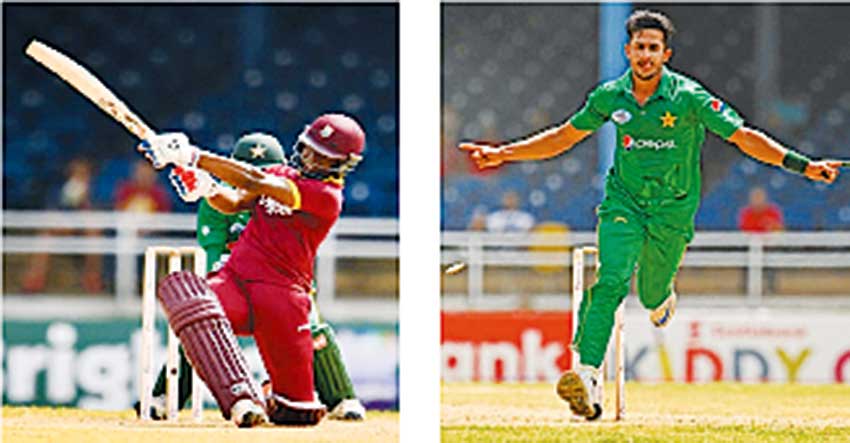 THE West Indies Cricket Board (WICB) Selection Panel announced the 13-man squad for the first and second matches of the ODI Series against Pakistan in the Brighto Paints presents the Q Mobile Cup.

The matches will be played at the Guyana National Stadium. First ball in all matches is 9:30 a.m (8:30 a.m. Jamaica Time).

Meanwhile, Pakistan defeated the home team by 7 wickets in the final T20 played at the Queens Park Oval in Trinidad to win 3-1in a no-contest between Pakistan’s bowling attack and the West Indies battling line-up. There were 66 dot balls in the innings — that’s 11 overs out of 20 — and eight of those dots were wickets. Hasan Ali bowled back-to-back maidens and finished with match-winning figures of 4-2-12-2.

For West Indies, Chadwick Walton, with 40, and Carlos Brathwaite, who made 37, his new career best, bettering the score he had made at the World T20 final, dragged West Indies to 124 for 8. It was nowhere near enough.

Although the pitch at Queens Park Oval was being used for its third straight match, there weren’t enough signs of the ball slowing up. And Pakistan’s top order capitalized. Ahmed Shehzad struck 53 off 45 balls to ensure a seven-wicket victory.

Hasan did most of his damage through in-swingers which, for him, come out best with an old ball. Three of his four overs came after the first 10 when West Indies fell from a respectable 59 for 2 to a silly 87 for 6. A slide like that might have been justified if there had been a spree of magic deliveries or an invasion of pitch demons. But all Hasan did was bowl full and straight. He understood that was enough by watching the West Indian batsmen set up on leg stump, and wait on the back foot, preferring to have room to free the arms and flat bat sixes.

Hasan had been hit for a six off the third delivery he bowled. The punishment was dealt to a good length ball — the same kind with which he profited later in the innings. That he still stuck to his strengths against a team known for its big hitting was a sign of the 23-year old’s self-belief. It helped, though, that when he came on for his second spell – 2-2-0-2 – West Indies were stuck in a rut. They were falling behind in the innings and tried to hit their way out of trouble. Not a sensible thing to do against a bowler harnessing a little bit of reverse swing.

The instigator of the choke, though, was legspinnerShadab Khan. He also dismissed the opposition’s best batsman on the day – Walton – by teasing him into big shot that only went as far as long-on. The reason for that was the dip the 18-year old generated. In much the same way, he deceived Jason Holder in the 16th over and though he didn’t get Kieron Pollard, he was beating his outside edge repeatedly.

Marlon Samuels had just struck back-to-back sixes. He has turned low totals into match-winning ones before and has had phenomenal success in finals both actual and virtual. There were no such heroics on Sunday because, on the heels of being involved in a bizarre run-out, his middle stump took a beating.

Hasan’s wicket-to-wicket line was poorly negotiated by Samuels, who stayed leg side of the ball and attempted a lame glide to third man. His knees buckled and as he sank to the floor, there was almost a look of begrudging approval of a delivery that had been too good for him.