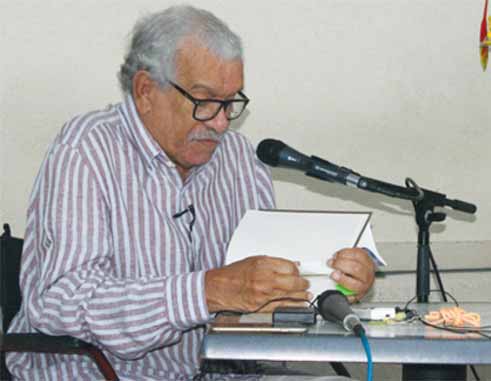 ANOTHER year.Another January 23. Another birthday celebration of our living Nobel Laureate at the Victorian mansion on the Hill of Fortune, courtesy of the tireless Nobel Laureate Festival Committee and hosted by a welcoming Governor General. I expect it is always, for those present, a night to remember, and that, quite possibly, for varying reasons.

So, January 23, 2017 – An evening of Poetry and Music featuring twelve local and visiting writers, the featured writer being Jamaica Kincaid. With Robert Lee and Gandolph St Clair, Nobel Laureate Committee stalwarts organizing, the former, Master of Ceremonies, the latter, Giver of Thanks, things must work well – and work well they did. The programme was pleasing in many respects: structure, choice of readers and musician, choice of content, execution. The following will probably be my memories of the evening:

McDonald Dixon – just the person to open the readings, the timbre of that baritone voice with its dark, dramatic tones starting things off on the right note. George Goddard – since his recent publication, getting the attention he rightly deserves. Two well-chosen pieces, engagingly delivered, his own composition a kwéyòl one (thankfully, or the evening would have gone by without one offering in lanngmanmannou). Mindy Zhang – a novel presentation, reading her own piece, not from a book or sheet of paper or even a mobile phone, but from an ever unwinding reel of white ribbon on which she had painstakingly written it.KendelHippolyte – I thought it just might happen, and true to my suspicion it did, the same poem of Derek’s being chosen by two poets as their contribution, a poem which each considered “the perfect poem”. Happily, their renditions could not have been less alike, Kendel’s idiosyncratic style impactful as usual.

Then there was Maria Cristina Fumagalli – in her own words “not a poet”, but really this non-poet poet’s expressive voice and effective reading of Walcott’s poetry in two languages – neither one nor the other her own – truly spoke to me. The always busy Robert Lee – with yet another publication, this time somewhat different (echoes of Walcott’s latest? I surmised, but have since learnt that my chronology was awry and Robert has been publishing – wait for it – ekphrastic poetry for years) as he immortalizes in verse the paintings of young St Lucian Canadian artist ShallonFadlien. Jamaica Kincaid – quite different in person from that which my imagination had conjured up after reading much of her work. And, let’s just say that I was altogether ‘fascinated’ by her delivery of the Kwéyòl lines in DW’s work. Yannick James – a young violinist, and appealing, with what has become his signature treatment of our Saint Lucian Folk melodies. Perhaps his involvement in the programme can be further explored so that he relates more integrally and meaningfully to the poetic presentations.

Finally, while I appreciate that this particular kind of programme cannot be offered in the same manner to a wider audience, the Nobel Laureate Festival Committee might consider arranging something akin to it which should see a youthful audience taking in performances by the young poets of the day.