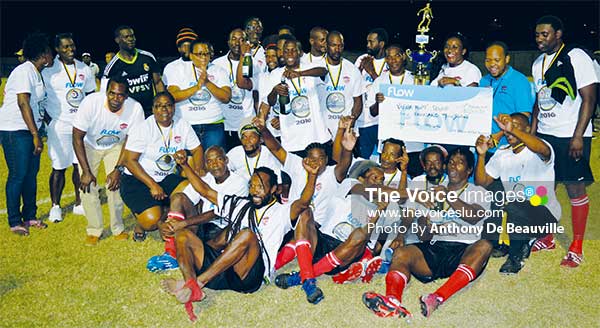 VIEUX FORT South continued where they left off last year with three national titles to emerge champions of the 2016/2017 Veterans in Sports Inc. when they defeated Anse la Raye 2-1 to get a first hold of the FLOW Plate Championship on Saturday evening at the Phillip Marcellin Ground.

In front of a capacity crowd, the score at the halftime whistle was nil-all as both teams squandered a combined seven scoring opportunities.

On the resumption, VFS kept their composure despite being on the back foot for most of the encounter as the visitors continued their relentless attack. Benjamin Gabriel, Anse la Raye’s most consistent goal scorer and captain, put his team ahead in the 55th minute with a well-struck right foot shot to goal past VFS’s Edmund Jn. Charles in goal to break the deadlock.

With the time ticking away, there was much more excitement to come. In the 76th minute, things suddenly changed in VFS’ favour as Ernie Soudatt slammed a free ball past the Anse la Raye goalkeeper for the equalizer after a series of passes in the midfield.

Soudatt was energized and so, too, his teammates. VFS were back in the groove again two minutes later when Soudatt hit a low right shot past the goalkeeper from a cross he received from Ellsberg Vital to put his team ahead.

The last 12 minutes was total drama and pressure coming from VFS. Soudatt missed a hat trick in the 80th minute with a powerful booter that rocked the cross bar. Certainly it would have been the goal of the tournament had he scored. In the 82nd minute, VFS’ Jefferson Jones missed a cross he received from Soudatt, while Camillus Henry missed a chance to extend VFS’ lead in the 84th when he struck a free ball past the uprights.

Anse la Raye, too, had their moments for the equalizer with two free kicks in two minutes just outside the 40- yard area with both shots going over the cross bar and a strike from Gabriel 45 yards out aided by a strong breeze that went past the uprights in the dying stages.

For the third place silverware, Laborie Veterans defeated Gros Islet 4-1. This time around the Gros Islet team looked a shadow of themselves with only 11 players available for the start of the encounter giving Laborie the luxury of substituting their players at will. Laborie led 2-0 at the halftime whistle with goals from Justus St. Aimee in the 19th and Patrick Modeste in the 33rd minute.

On the resumption, Laborie extended their lead in the 62nd minute off a St. Aimee strike. Mike Phillip pulled one back for Gros Islet in the 64th minute while Modeste sealed the deal for Laborie with his second goal in the 86th minute.

In awards presented after the tournament, Vieux Fort South received the FLOW trophy, $2,000 and gold medals. Runners-up Anse la Raye received $1,500, a plate and silver medals. Third placers Laborie Veterans received $1,000, a plate and bronze medals and GrosIslet received $800 and a plate. Gros Islet’s KervinMortley scored the most goals – four — and MVP of the final was VFS’s Ernie Soudatt.