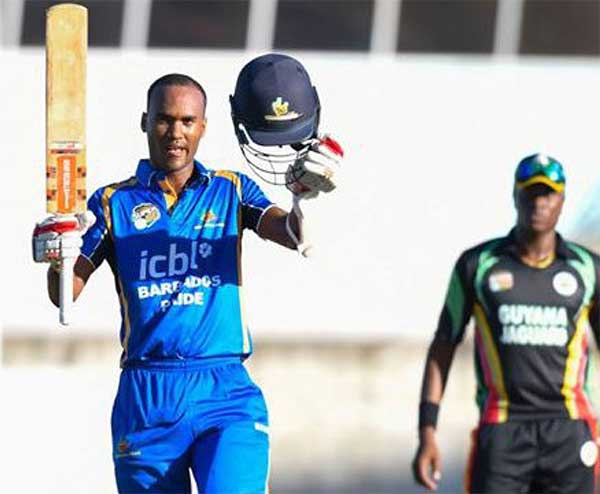 The unflappable right-hander carved out a patient 101, an innings that was the foundation of Pride’s 302 for seven – their highest-ever 50-overs total at the venue.

In contrast, left-hander Jonathan Carter smashed a stroke-filled 75 off 63 deliveries while captain Jason Holder, with 31 off 21 balls and Ashley Nurse, with 28 off 15 balls, chipped in with cameos down the order.

In reply, Jaguars never really recovered from a stuttering start and slumped to a miserable 157 all out off 32 overs.

Captain Leon Johnson resisted with a top score of 55 off 68 deliveries but he was the only one to pass 20 as the Jaguars batting, missing the injured pair of Shiv Chanderpaul and Chris Barnwell, collapsed badly.

Their misery was engineered by the pair of left-arm spinner Sulieman Benn (4-35) and off-spinner Ashley Nurse (4-42) who shared eight wickets between them.

In the other match on Tuesday Combined Campuses and Colleges Marooners raised the curtain on the Regional Super50 in style when they stunned Jamaica Scorpions by 75 runs.

Fired by teenaged opener Amir Jangoo’s measured 64, Marooners raised a modest 214 for eight off their 50 overs at 3Ws Oval.

However, Scorpions were then undermined by off-spinner Mark Deyal (3-22) and fast bowler Keon Harding (3-30) who claimed three wickets apiece, as they tumbled to a disappointing 140 all out off 35 overs.

Only Brandon King with a top score of 48 showed any enterprise as Scorpions failed to mount any meaningful partnerships and lost wickets steadily.

Yesterday, the WIndwards Islands Volcanoes scored 221 off 46.2 overs in the match against the West Indies Under 19 team at the Vivian Richards Cricket Ground in Antigua. Sunil Ambristopscored for the Windwards with 54 while skipper Liam Sebastein scored 31, Kyle Mayers 28 and Delorn Johnson 26. In reply the West Indies Under 19 team were 17 for one wicket off seven overs at press time.

The Leeward Islands Hurricanes and the Kent Spitfires were engaged in another match yesterday.