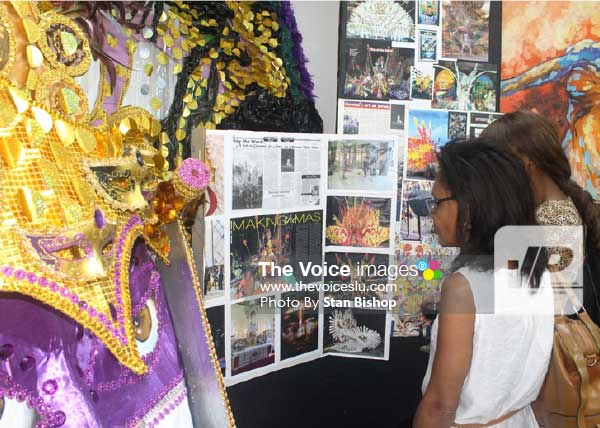 THE works of the late iconic painter, Sir Dunstan St. Omer, and his relatives are now on show at the Mexican Embassy at Vigie as the embassies of Mexico and Spain host “St. Omer – A Family of Artists”, an exhibition that pays tribute to the creative family.

The exhibition, which opened on Wednesday and runs until February 1, also features works from Sir Dunstan’s sons – Alwyn, Luigi, Giovanni, Julio – and daughter-in-law, Marcella. The paintings, including Sir Dunstan’s famous madonnas and landscapes, and crotchet art give some insights into the family’s genius.

Alwyn St. Omer said the exhibition pays tribute principally to the family’s patriarch who dedicated his life to painting the island’s identity in some measure. With the exhibition being held during the Nobel Laureate Festival, he said the timing seems appropriate for the symbolic beginning of the 50th anniversary of the Saint Lucian flag, which his father designed in March 1967.

St. Omer said his father, who died in May 2015, had a long and close friendship with the Mexican Embassy, adding that the family was grateful to both embassies for their latest support. However, he believes more local support needs to be shown for the arts.

Sponsored
“We’re hoping that the government and private sector look into the possibility of supporting the arts, including having more aspects of the arts in public spaces – not just paintings but various forms of the arts,” St. Omer told The VOICE at Monday’s opening ceremony. “Artists always need an avenue to express themselves and their art. When artists produce their work, it’s for the world to see and appreciate. However, it’s very difficult in Saint Lucia to get these avenues and support to host these kinds of exhibitions.”

St. Omer said a number of societal problems could be curbed – especially among the youth – if greater appreciation, understanding and support for the arts are shown.

“There is a lot of young, incredible talent among us and it would be a shame for the powers-that-be to ignore that. The artists must be able to get the support they need,” he said.