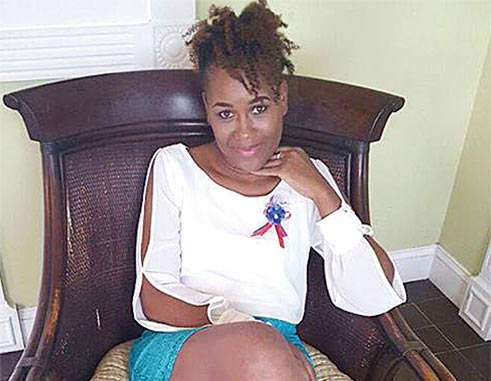 ONE of the greatest injustices one can go through in life is to never experience life outside of one’s hometown/birthplace. There many factors that creep up and prove to be hurdles that are way too high for many to jump over to allow them to see the wonders that the world has to offer. But the call and yearning to explore continues to burn strong.

But for today’s FITC, a small opportunity presented itself to her and boy did she bite.

Snaliah Mahal is a free and globetrotting spirit whose love for adventure, the environment and hunger for knowledge has taken her to places that will leave many in awe.

Fittingly, she works as a part time Environmental Consultant, and has also founded a micro-business almost a year ago called “7Ks”

The Monchy resident said she has always been the type to try everything at least once, just as long as it doesn’t jeopardise her health, and beliefs that she holds true to.

Mahal said: “I love the outdoors and everything to do with the environment and its appreciation and care, so you would find me going on hikes that some people just won’t do, camping and participating in environmental education, cleanups and volunteering.”

Mahal’s Zen personality has also worked as a bonus for her as she travelled the world which gave her a wider understanding of the individuals and cultures she encountered along her journeys.

Today, as Mahal contemplates her next moves, she had a few choice words for anyone wanting to follow in her footsteps and see the world…especially those who think it’s impossible. Carpe Diem!!!

The VOICE: Your love for the great outdoors and the environment is no secret, but just how far does this passion go?

Mahal: It is a passion for life and living I would say. At the age of 14 I was dealt a card, most persons would not want to deal with at all, and I firmly believe it is one of the motivating factors which influenced my approach to life. I love languages and learning about different cultures. I guess spending six years away from home, in places very different from the Caribbean can make you appreciate and embrace differences more. I lend my time to worthy causes whenever I am able to, especially if it has to do with youth development and environment. As a former secondary school teacher, I recognise the shortcomings of our education system and so it is important to me that I help when possible.

The VOICE: Speaking about spending time away from home, your passion has taken you far and wide across the globe. Tell me a bit about your travels.

Mahal: Because of my work and also through volunteering with the Caribbean Youth Environment Network in Saint Lucia I have had opportunity to go to France, Trinidad and Tobago and Brazil. I have also been to Colombia for professional development for teachers of Spanish. The other countries; Italy, Vatican City, Germany, the Netherlands, Switzerland, France, Malaysia and Singapore, were fulfilling life long dreams of visiting Europe and Asia. I lived in Mexico and the UK during my undergraduate and postgraduate studies and there I cultivated life-long friendships and have some truly unforgettable memories. Mexico will forever be my second home.

The VOICE: At your age, from where did you get this thirst for adventure and exploration?

Mahal: I’m not exactly sure where it came from to be honest. I have reflected a number of times and think that it may have to do with my experiences during the Library Summer Workshops that I took part in every year when I was in primary school, where we learnt about Saint Lucia, her history and culture. Added to those workshops, I read a lot of books as a child, including Nancy Drew, Hardy Boys, Sweet Valley and Christopher Pike. These books made me very curious to learn about all those places I read about. Also, I grew up in a community where during school breaks I would be with my cousins and neighbours picking mangoes, going to the river and sometimes just coming together to cook half ripe bananas with chicken backs on stones or playing marbles in the dirt under the neighbour’s house. It solidified for me though when I did an internship at the United Nations Information Centre in Mexico City and became more familiar with the work of the UN in the environment and sustainable development. It was then on the verge of completing a degree in International Relations that I decided that I would do a Masters in Sustainable Development or a related field. I ended up completing one four years later in Climate Change and International Development.

The VOICE: What did it take for you to up and leave in terms of both finances and courage?

Mahal: I left on a scholarship and so, my motivation to leave and study in Mexico was because I realised early on that my parents would not have been able to afford the venture at the time to assist much in that regard. Furthermore it surely couldn’t get any better than receiving a scholarship. I would not have passed on that opportunity to study outside of the region and ensure that at the end I not only had a degree but also five years of wonderful experiences and becoming fluent in Spanish. I was young with no responsibilities really and I was not afraid…I was actually excited. My only probable concern was worrying about falling sick over there without my support system…but then, if I had to worry about that every time, then I would not accomplish anything and I certainly wouldn’t be where I am today.

The VOICE: Out of all the countries you’ve visited, which three stood out to you most and why?

Mahal: Malaysia for the food, food and more food at all hours of the day and night. Very different from any of the places I have visited before because of the strong influence of Islam. Hearing the muezzin do the adhan everyday was an experience I will never forget. Mexico because of its rich history…the food is to die for and the people are lovely, and Paris because…it is Paris! I fell in love with the French language at an early age, so Paris was at the top of my list of places to visit. I studied and taught French so for me, it was a suitable part of my love affair with French.

The VOICE: But can any of these countries come close to home though?

Mahal: Home will always be home for me. My experiences in these other countries have given me an even better appreciation for this 238 sq miles that God has given us to take care of

The VOICE: Tell me about your most bizarre experience whilst globetrotting.

Mahal: I was followed by a French man. (Laughs) He was curious I guess! I saw him looking at me but you know, single woman walking around Paris by herself…So I was tired from walking around all day and sat on some steps overlooking the River Seine and he took that opportunity to approach me. Now my French was nowhere near where it should been back then, and his English wasn’t that great either, but he knew a bit of Spanish. We had an interesting conversation about Paris, the Caribbean and just general conversations in French, Spanish and English. I had a very good laugh that day. I was very skeptical about speaking to him and tried to thwart him in multiple languages but that didn’t seem to work, so I just sat there like all the other tourists in the area and just we spoke. I made sure to look back when I left to ensure he wasn’t following me still.

THE VOICE: Now I know it can’t all be rosy out there, what were some of the toughest reality checks you had to deal with?

Mahal: I think my only negative experience which in fact turned into a positive for us (Caribbean students) who studied in Mexico, was a few disapproving looks and words directed at us because of our darker skin. They often thought we were Africans, Jamaicans, African Americans, Cubans, Haitians, Colombians or Belizeans (if you were in the south of Mexico). It was more out of ignorance though and I guess some of them had not seen so many black people at once…we used to move in groups a lot. Going clubbing was the best though…we got royalty treatment.

The VOICE: Surely you have learnt some valuable ways of life from the different cultures that would benefit ours. Given the opportunity, which of these qualities would you introduce to St. Lucia, and in actuality, do you intend on taking any steps to do so?

Mahal: The organisation and cleanliness that obtains in Singapore is something that we can learn from. Mexico does an amazing job of selling its culture. It is not all about five star hotels, white sand and blue seas. They are a hardworking people, who are extremely proud of their history and living in Mexico, you can feel the sense of pride oozing from them despite the many difficulties they face over there. I am trying to marry my love for the environment with my life and what I’ve learnt from my experiences in those different countries, and 7Ks I believe is giving me an opportunity to do so.

The VOICE: You have been blessed with an opportunity that most people from around the globe can only dream about. What are some of the most valuable lessons you’ve learnt from traveling the world?

Mahal: Number one is to always keep an open mind. One must always be prepared to see, hear or even eat things completely foreign to them or what one may consider strange or bizarre…that is how learning occurs. Perhaps most importantly, you must always be prepared to talk about your country too. You meet all kinds of people on the way and you are basically an unofficial ambassador to Saint Lucia. Have boundaries for yourself but boundaries that can be moved, adjusted even erased based on the circumstance