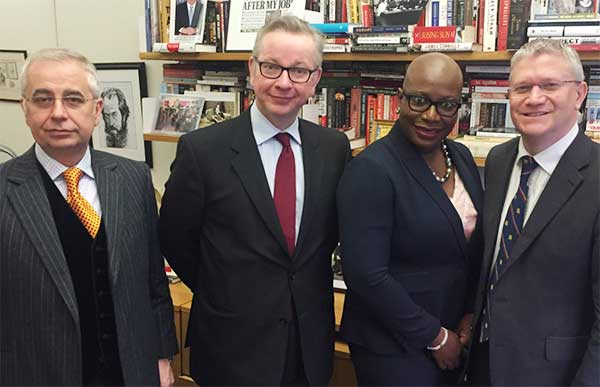 EDUCATION Minister, Dr. Gale Rigobert, Friday held discussions in the British Parliament during a series of meetings with the British-Caribbean All Party Parliamentary Group and the British Caribbean Chamber of Commerce on the subjects of future cooperation and education.

Meetings commenced with the former Lord Chancellor and Secretary of State for Education, Michael Gove MP, just returned to London from a meeting with the President of the United States, Donald J Trump, at the beginning of this week.

Gove, a candidate to succeed David Cameron as Prime Minister in June 2016 and the co-chair of the UK Brexit Campaign, together with officers of the All Party Parliamentary Group, addressed new opportunities for the UK to refocus its relationship with Commonwealth Realms and Saint Lucia following Brexit. In particular the possibilities around redirecting parts of the UK aid budget.

Meetings focused on education, educational best practice and know-how and included the British Caribbean Chamber of Commerce, represented by its President, Boka Group CEO John Kennedy, which in March 2015, together with Dr. Stephen King of the educational charity, RISE (St. Lucia) Inc. and Shelley-Anne Noon, announced a substantial educational opportunity for Saint Lucian students to pursue law and business with undergraduate and postgraduate degrees at the BPP University, London.

Scholarships covering the significant costs of tuition for over 40 local students were made available and these degree courses will be completed during 2017.

Dr.Rigobert continued her discussions in Parliament with other officers of the British-Caribbean All Party Parliamentary Group.

The meetings concluded with an agreement to intensify cooperation between the groups and Saint Lucia to further both educational, social and economic ties between the two nations.