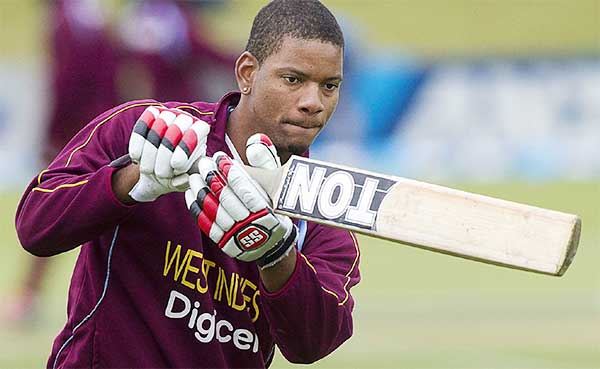 Windwards Lose Second In a Row.

Sent in at Coolidge Cricket Ground, Hurricanes amassed a tournament-high 333 for six off their 50 overs, also their second highest total in the history of the regional competition.

The left-hander Powell, in his first full season of regional cricket following a self-imposed break, pummelled a superb 135 off 137 balls, which included 10 fours and four sixes.

For the opener, it was his second hundred at this level – the first coming just three days ago against West Indies Under-19s.

Burly West Indies A all-rounder Rahkeem Cornwall blasted an unbeaten 70 from 58 deliveries and Montcin Hodge, 54, while all-rounder Kevon Cooper arrived at the death to stroke a cameo 12-ball, unbeaten 28.

Captain and off-spinner Liam Sebastien claimed three for 42 while seamer Kyle Mayers supported with two for 66.

Joseph then wrecked the Volcanoes innings with career-best figures of six for 31, as the visitors crashed to 149 all out off 28.1 overs.

They were tottering at 24 for five in the seventh over with Joseph accounting for four of the five wickets to fall, and though Mayers top-scored with 45 and Darren Sammy got 33, there was no recovery for Volcanoes.

They have now lost two in three outings.

Powell dominated the first half of the encounter, however, with the second highest all-time individual score for Leewards.

He was audacious from the outset, rushing to his half-century off 43 deliveries in the 16th over with seven fours and a six, before bringing up triple figures off 96 balls in the 31st over with eight fours and four sixes.

Powell inspired three half-century stands which underpinned the Hurricanes innings. He posted 97 for the first wicket with Hodge who struck 11 fours in his 48-ball knock and then dominated an 81-run second wicket partnership with debutant Jermaine Otto who made 21.

When Hurricanes lost three quick wickets for 11 runs in 21 balls, Powell and Cornwall came together to rally the innings in a spectacular 99-run, fifth wicket stand.

Cornwall was typically aggressive, clobbering four fours and five sixes and when Powell departed in the 47th over, he found an ally in Cooper, and together they added a frenetic 43 off 17 deliveries in an unbroken seventh wicket stand.

Joseph then got stuck into Volcanoes innings from early, wiping out the top order in quick time. He had Devon Smith brilliantly taken at mid-on by Chesney Hughes without scoring at five for one in the second over and three balls later, deceived other opener Johnson Charles (4) with a slower ball to have him caught and bowled with one run added to the score.

With the first ball of his next over, he trapped Andre Fletcher lbw for one and four balls later also accounted for Kavem Hodge for four. When medium pacer Cooper had Sunil Ambris lbw for seven, Volcanoes were in turmoil.

The left-handed Mayers and Sammy then tried to blast Volcanoes out of trouble with a 70-run, sixth wicket stand.

The partnership was broken when Sammy was brilliantly taken on the mid-wicket boundary one-handed by Gavin Tonge sprinting around the ropes in the 18th over.

Unfortunately, Tonge’s excellence was marred by a collision with Cooper who had to be stretchered from the field and taken to hospital with facial injuries.

Mayers followed in the 21st. over, lbw missing a swing at pacer Tonge (2-47) and the innings fizzled out despite Shane Shillingford’s blustery 28-ball 27.