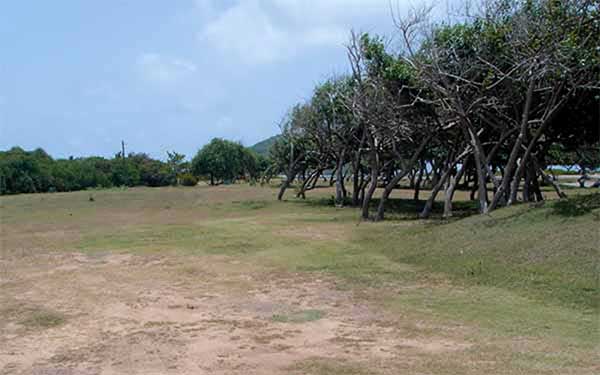 Pearl of The Caribbean Series – Part 2

BUT as they say the proof is in the fine print, or the devil is in the details. No sooner had St. Lucia gotten the good news, the DSH agreements were leaked and went viral, and it appeared that the deal of the century was too good to be true. Using a phrase—don’t piss in my eyes and call it rain—from Rick Wayne, St. Lucia’s most famous, if not most celebrated, journalist, DSH had apparently pissed in the eyes of the Prime Minister and called it rain, or the Prime Minister had pissed in the eyes of St. Lucians and called it rain, or both.

According to the first signed agreement, called the Framework Agreement, the Pearl of the Carib-bean would occupy about 700 acres of land stretching from the Atlantic Ocean in the Mankótè Mangrove forest area, crossing the Vieux Fort-Castries Highway (which would have been redesigned or rerouted) and subsuming BeauséjourFarrm, which comprises grazing pastures and a government experimental farm. The marina would be built on the Atlantic coast, with the seabed dredged and a waterway created alongside the MankótèMangove; and to sweeten the deal and maybe to quiet or placate nature lovers the developers had planned to build boardwalks and a museum in the mangrove forest. However, protest from the St. Lucia National Trust, environmentalists, and other concerned citizens against predictable damage to seabed, beach and mangrove forest, resulted in a change of plans and a second agreement, referred to as the Supplementary Agreement.

Of course, the protest was well founded, for Vieux Fort’s eastern seaboard comprises a unique set of natural, ecological, cultural and historical assets. The seabed at Bois Chadon (sea egg forest), the northern end of Vieux Fort’s eastern coastline, in the Mankótè Mangrove area, is home to the island’s largest seagrass forest, a major breeding ground for sea urchins or sea eggs. Pointe Sable Beach, stretching from the foot of the Moule-a-Chique peninsula to Bois Chadon, is the longest uninterrupted stretch of sandy beach on the island. It is a major sea turtle nesting ground, and offers the best kite and windsurfing beach on the island, and one of the best in the Caribbean. Occupying over 98 acres, the Mankótè Mangrove forest is the island’s largest remaining stand of mangrove, accounting for 20% of St. Lucia’s mangrove acreage, and home to 17 species of fish. Nearshore, the Maria Islets serve as a nesting ground for many migratory birds, and a sanctuary for the St. Lucia Racer or Kouwess snake and the St. Lucia Whiptail Lizard (which bears the same colours of the Saint Lucia national flag), both of which are endemic to the islets. The Moule-a-Chique peninsula at the extreme southern end of the island offers a breath-taking, panoramic view of the Vieux Fort landscape and seascape and beyond and is said to be home to the second highest lighthouse in the world.

Such is the social, aesthetic, and environmental importance of the area, that it has gained national and international attention. Together, Savannes Bay Mangrove (a short distance north of Bois Chadon) and Mankótè Mangrove were declared Ramsar sites in 2002, and the off-shore islands of Scorpion Island (in the Savannes Bay area) and the Maria Islets were declared wildlife reserves. In 2001 the government declared the four square miles or 2,565 acres of Vieux Fort’s eastern coastal strip, including Pointe Sable Beach, Mankótè Mangrove, and the Maria Islets, a protected area—Pointe Sable Environmental Protection Area (PSEPA)—and ceded its management to the St. Lucia Natural Trust, the official protector and conserver of the nation’s natural and cultural heritage. There is now a move afoot to designate Moule-a-Chique a national landmark in the manner of Pigeon Island at the northern end of the island.

To the deceiving eyes, PSEPA generates little economic activity. However, the mangrove forest, beach and coastal waters support several livelihoods including charcoal production, horseback riding and nature tours, sea moss farming, and sea egg harvesting. In addition, the mangrove serves as critical nursery for reef fish thus helping to maintain the viability of Vieux Fort’s fishing industry, the largest in the country. The value and productivity of the PSEPA could not be more contrary to the Prime Minister’s expressed view that all lands not crowded with homes, commerce, and industry were wasted lands.

In the Supplementary Agreement and the reconceptualization of the Pearl of the Caribbean that followed objections to interference with the coastal ecosystem, the mangrove and the seabed were left untouched. The marina would be built on the Caribbean side of Vieux Fort. And in terms of land allocations, 290 acres in the general Beauséjour area will be used for the horse race course and other equine activities; a second parcel, acreage not specified (but maybe 300 acres or more) will be held in reserve for future development, and another 90 acres, inclusive of the George Odlum Stadium, may be added to facilitate the establishment of education institutions within the project.

For hotels and villas, the development will also include 92 acres of Pointe Sable Beach, stretching from Hewanorra International Airport to the foot of Moule-a-Chique, and including the area south of the airport fence, going across the Filao area, Pointe Sable Recreation Park, and into Bruceville. Apparently, the government has informed some of Bruceville residents in the path of the development that they have to move, but the government hasn’t presented them with any relocation plan or compensation package. The fear among Bruceville residents is that they will be shaft: kicked out of their homes with no adequate or acceptable alternatives, particular since they are squatters and it is the government and not the developer that is responsible for the removal of people and obstructions in the way of the development.

An additional 43 acres of land along the Caribbean Sea, between Vieux Fort Town, El Parata and the Vieux Fort-Laborie Highway will be used to establish a marina, a casino, and related commercial enterprises.

So in total the project might engulf 800 plus acres of Vieux Fort lands, and would cause the disappearance of some of the town’s most important recreation spaces. The project will be implemented in stages, and the agreement allows 20 to 25 years for its implementation, so lands set aside for the development could lie idle for up to 25 years, yet unavailable for any other development or residential use, local or otherwise.

Some of these lands will be sold to the developer at US$60,000 to US$90,000 per acre, or US$1.4 to US$2.1 per square foot, considerably less than current market rates, which starts at about US$5.5 (EC$15). Other lands will be leased at US$1 per acre per year for a period of 99 years. In cases where the asking price of private land exceeds US$90,000 per acre, the government will be responsible for paying the amount in excess of the US$90,000. For some lands the developer will have the option of leasing or buying; and in the case of buying, the developer will only pay for a parcel of land after the development for which the parcel was earmarked is completed. The developer will be free to sell any such lands acquired from government to other investors at whatever price and terms he decides. Notwithstanding, if after two years of the project launch the developer hasn’t secured at least 200 investors (sold 200 passports) for the project, upon the developer’s request the government is obligated to not only buy back the land but pay the developer the full value of infrastructure established on the land.

Since the development will subsume the Beauséjour Farm, the developer will acquire the abattoir building, a EC$12.5 million donation of the Taiwanese government that sits on the farm, and outfit it to serve equine related uses. In return, the developer promises to build an abattoir at another location of government’s choosing.

The Supplementary Agreement stipulates that, at its own cost, government is to discontinue use of the Vieux Fort landfill by the end of March 2017, and to decommission the landfill by the end of 2017. In fact, the government will bear the cost of removing and relocating any structure or infrastructure or public utility that is in the way of the development, and will be responsible for bringing public utilities such as water, electricity, sewage, refuse collection, postal service, and telecommunications to the doorsteps of the development. The government is also responsible for establishing an Educational Training Fund for the equine industry, and an Equine Disease Free Zone to safeguard the health of the imported thoroughbreds, and those to be exported. The Equine Disease Free Zone may mean no animal husbandry within a certain number of miles from the equine establishment. Therefore, animal husbandry farmers, especially pig farmers, in such places as Pero, Belvue, Cacoa, La Ressource, Vieux Fort, Augier, Laborie, etc., may be required to cease operations, which obviously will have startling livelihood consequences.

The developer will be exempted from income tax on interest earned, value added tax, property tax, alien landholding license fees, stamp duty and vendors tax, custom duties on imports, and on alternative energy, corporate tax, withholding tax, and any other tax exemptions allowed under the Incentives Act & Tourism Stimulus and Investment Act. In addition, the government cannot approve any new licenses for casinos, horse racing wagering and betting, and free trade zones for any other development in any part of the country.

The Southern Equestrian Association (SEA) has been conducting horse racing for over a decade now, and for just as long they have been proposing and advocating for a permanent horse race track that would allow gate fees, concessions, and betting.

In fact, the Vieux Fort stables were not perturbed about the DSH project at all, because they were confident that once they have their own modern track, their half-breed and creole races and bareback racing will continue to draw large audiences among St. Lucians and visitors alike. But the clause in the DSH agreement that precludes the government from issuing new wagering and betting licenses, will seriously undermine their ability to conduct a viable horse racing enterprise. However, even more detrimental to SEA is the Equine Disease Free Zone, because it is very unlikely that their horses will meet the requisite health requirements, and so the horses will either have to be put down or moved outside of Vieux Fort, beyond the disease free zone.

After all what St. Lucia has to give up to facilitate the development, the only capitalization pledge made by the developer in the agreement is US$5 million earmarked for the Phase 1 of the development, involving the establishment of the horse race track and related activities. Apparently all other capital for the Pearl of the Caribbean will come from other investors, mainly through purchase of St. Lucian citizenship. This suggests that the Pearl of the Caribbean is a pie in the sky. The only phase of the development for which there is any certainty, meaning for which the developer has the capital or is willing to invest in, is the equine related phase, all other activities are dependent on the sale of St. Lucian passports, yet over 800 acres of land would be set aside for up to 25 years for in case the developer can swing deals with potential purchasers of St. Lucian citizenships. Now, doesn’t it stands to reason that the only agreement the Prime Minister should have signed with the developer is one pertaining just to equine activities, and if need be hire him separately for his architectural and passport marketing services?