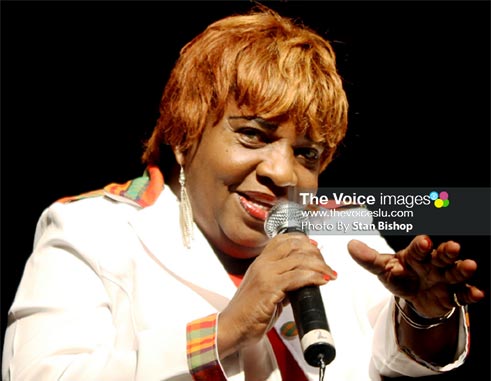 AS far as calypso history goes, Frances Marileen Baptiste has definitely made an indelible mark on a few of its pages. For a performer whose career has spanned decades, there still seems to be that tireless streak that forces her to get onstage and deliver riveting performances. From this year, however, she hopes to turn the heat up.

Baptiste, known by the stage name Lady Leen, was born in Castries (Block B in the CDC apartment complex) where her mother, Beatrice, raised her and her brother, Michael. She attended the Gordon & Walcott Memorial Methodist School before moving on to St. Joseph’s Convent. The passion to perform, she said, was a constant.

“Ever since I was a child, I liked singing. I remember being around ten and singing into the broom and glancing at the mirror while I was sweeping the floor. I was also a member of a dance troupe afterwards,” Baptiste tells me.

In those days, she embraced different genres of music, adding that the only brand of music her mother never really played at home was Country & Western. Baptiste said she admired singers such as Aretha Franklin, Miriam Makeba, Dionne Warwick and Bob Marley. Despite not knowing all the lyrics back then, she recalls doing her best singing the songs.

At St. Joseph’s Convent, Baptiste was more interested in netball and table tennis. Although she had a knack for music, she admits that aside from singing in the choir periodically, the performing bug never lit up in her at school.

In her twenties, Baptiste joined the Hewanorra Voices headed by Joyce Auguste and sang soprano before working as a back-up singer for a calypsonian for about three years. She later teamed up with a guitarist as part of an act called “The Strolling Minstrels”. Singing without a microphone, Baptiste’s gigs entailed her greeting each visitor at their dinner tables in the hotel restaurants. After the guitarist fell ill, Baptiste was forced to take up a full-time job in a hotel store but continued her singing gigs part-time at another hotel.

In 1990, she entered the competitive calypso fray for the first time after walking through Castries and having the first lyrics of her first song, “Respect”, float through her mind. That was a defining moment, she said.

“As soon as the words came to me, I rushed home and used a tape recorder to record whatever lyrics of the song I had up to that point,” Baptiste said. “The song just flowed, so I gave it to a musician named Clarence Joseph and he fixed it up for me.”

That year, Baptiste seemed intent on making her mark on the calypso circuit. With “Respect” and her timeless feminist anthem, “Woman In A March” (written by Zephrinus “Face” Calixte), she became the first woman to make the final round of a calypso monarch, eventually placing third.

“In a male-dominated environment, I was amazed that everyone gave me their full attention as soon as I stepped onto the stage. In my mind, I wasn’t coming there like a lady because I knew that I could not come as a softie among those guys. I knew I had to come rough,” she explained.

After competition that year, Baptiste went to Dominica where she participated in a Queen of the World calypso competition. It was there that she struck up a longstanding friendship with veteran Trinidadian calypsonian, Singing Sandra. Despite being relatively new to competition, Baptiste placed sixth among the dozen or so calypsonians in that competition and was invited to New York to perform at the Pre-Labour Day show.

In 1991, she represented Saint Lucia at Expo ’91 in Antigua backed up by Burning Flames before heading out on a tour of St. Maarten, Dominica and Antigua in 1992 performing alongside Singing Sandra, Denise Plummer and Natasha Wilson. A year later, she was invited to perform with the United Sisters in Trinidad before heading out to New York.

In 1994, Baptiste was a finalist in the CBU song competition. That same year, she won the title of Most Improved Calypsonian when her tent, Ambassadors Calypso Tent, of which she was a member for 18 years, participated in a Clash of Tents show in Dominica.

In 1995, she placed second in the Saint Lucia Calypso Queen Competition. A year later at the National Cultural Centre, she performed alongside Trinidad’s David Rudder. Two years later, she placed fourth in the calypso monarch and released a Christmas album entitled “Xmas Ecstasy”, which featured songs written by fellow calypsonian and friend, Pelay. That same year, she was the recipient of the Outstanding Achievement Award for International Women’s Day in Saint Lucia.

Since 1990, Baptiste has made the final round of the calypso monarch on many occasions, placing in the top four on some occasions. In 1999, she competed in the soca monarch, placing third with “Jam Time”, a song written by Bernard Fanis. She has also competed in soca monarch on a few occasions since.

Other calypsos by Baptiste include “Your Child and their Mind”, “I Am Woman”, “Poverty”, “The Pen is Mightier than the Sword”, “Suicide” and “Message to the Youth” and she has worked with many songwriters, including Jeff “Pelay” Elva, Scabby, Keith Miller, Christophe Grant and Carlton Roberts.

Over the years, Baptiste’s chances at winning a crown were dashed when bouts of asthma interjected on the night of the calypso final. For many years, it was almost a foregone conclusion that it would rain during her performance in the final. Despite being nebulized prior to performing, Baptiste had to cut her performance short and rush to hospital to be nebulized.

Baptiste, who describes herself as being down-to-earth, said her music comes from a deep place where she found herself facing numerous struggles, including being the breadwinner for four generations: her mother, brother, son and grandchildren. Those struggles, she said, have moulded her into a strong person always ready to surmount the insurmountable. She also believes she has created a legacy of which she’s proud.

“As a girl, my mother used to tell me that I would be either a singer or a dancer,” the entertainer said. “But I was able to do both but chose to make singing my career. I mean, I can afford to sing for as long as I can. In fact, if I’m not on stage singing, I don’t feel well. Music is my passion.”

For her meritorious contribution to calypso and the arts, Baptiste was awarded the Saint Lucia Les Pitons Medal (SLPM) in 2005. She also received an award from the staff and students of her alma mater, St. Joseph’s Convent.

In 2011, Baptiste received an award for her outstanding contribution to the arts from the University of the West Indies (Cave Hill) Institute of Gender and Development Studies. Her most recent honour was a Lifetime Achievement Award from the St. Lucia House Foundation and Saint Lucia Consulate in February 2016.

Some years ago while Baptiste served as a trustee in the calypso association, she expressed concerns that aging calypsonians had no access to affordable health care since many of them end their careers either disenchanted or broke. Her dream was finally realized last year when an artiste endowment fund was set up following the death of former Take Over Tent leader, Cyril “Get Through” Felix.

Baptiste also believes some reforms need to occur in the business of calypso, including increased performance fees and an appreciation for the art form itself. As a consummate performer, she said she has been in tight spots when she would perform a song in the first round of a calypso competition, dart off to do a singing gig at a hotel and return in time for the second round of the competition. Baptiste also believes that a song’s message needs to convey something that elevates people’s lives and thinking.

“One of the things that get to me is when I hear a song that degrades women and the women gyrating to it,” she lamented. “That just does not sit well with me. I think we need to have some respect for ourselves as women and our self-esteem must be high. So I try to use my music to empower women.”

For 2017, Baptiste intends to outdo herself by bringing to the fore other dimensions of her that her many fans might not be used to. Like the young girl who sang into her mother’s broom back in the day, she hopes to reach back and tap into the soulful energy that first spirited her to get into doing the thing she loves best: singing.

“People tend to think of me as being just a calypsonian,” Baptiste said. “However, because I have gigs on the hotel circuit, I do other genres of music. But I’m really looking forward to doing more soca music as of 2017 because that’s where one can get more work and money. Inasmuch as I love calypso, it does not cut it for me economically.”