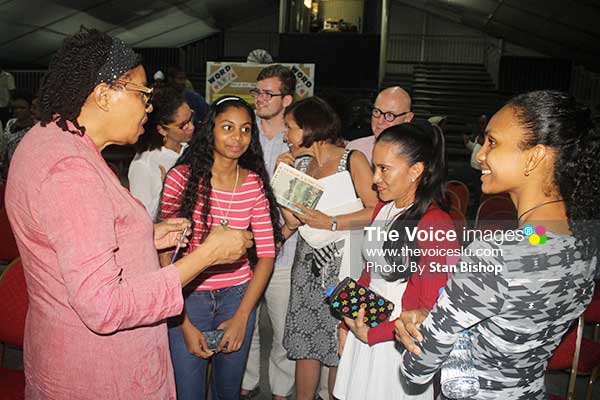 Kincaid, 67, used the lecture’s theme, “Our Homer: Derek Walcott”, to pay tribute to Sir Derek, from whom, she said, she has learned a lot from during her writing career.

“All of us who came after him have benefitted (from his work). No one would have understood me, really, if Derek hadn’t existed,” Kincaid, Professor of African and American Studies in Residence at Harvard University, said.

During the lecture, Kincaid used excerpts from Sir Derek’s works to weave the story of the Caribbean’s fate during the pre-Columbian and post-Columbian eras, a fate that continues to marvel the world through literature, including Sir Derek’s works. She ended the lecture by reading his famous poem, “Love After Love”.

Governor General Dame Pearlette Louisy, members of the diplomatic corps, writers and other supporters of the arts made up the small audience that also got the chance to pose questions to Kincaid during the Q&A segment. Also present was a group of 25 literature students from an American university who travelled to Saint Lucia for the lecture. (Sir Derek, 87, was absent on Tuesday evening due to a recent injury).

After the lecture, the audience participated in a word art activity in which they wrote a line of poetry on strips of cardboard and posted them sequentially on a blank board to form a new poem.

Kincaid (real name Elaine Cynthia Potter Richardson) was born in St. John’s, Antigua in 1949. She got her big break writing for “The Village Voice” and “Ingénue” before landing a job at “The New Yorker”.

Her work includes themes of colonialism (and its legacy), post-colonialism and neo-colonialism, gender and sexuality, British and American imperialism, colonial education, racism and time.