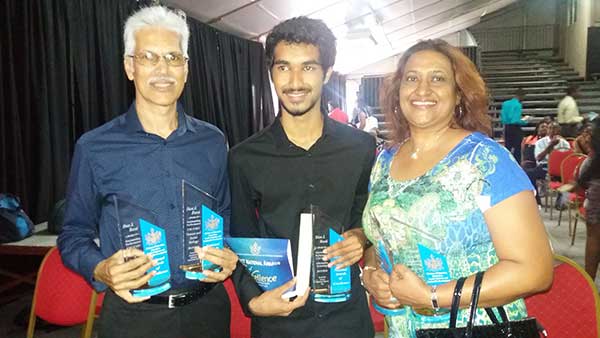 THE future and pride of the nation was celebrated on a grand scale Tuesday morning, as the Ministry of Education hosted the 2017 National Awards of Excellence at the National Cultural Centre.

The event saw a number of students receiving honourable recognition for their outstanding performance at last year’s Common Entrance, CXC and CSEC Examinations.

During the ceremony, several teachers and ancillary staff were awarded, as well as the schools with the highest performance rates and most improvements.

Education Minister, Dr. Gale Rigobert gave the welcome speech and emphasised the importance of encouraging the children of the nation to be the best that they can be at all times and in every facet of life.

Rigobert said: “Too very often we hear ourselves boast of having two Nobel Laureates as if to suggest we aren’t quite sure that we are capable of producing a third. I dare to imagine that in my lifetime, St. Lucia will produce a third Nobel Laureate, and it is ceremonies such as this one that helps to unearth and recognise the talent from very early on. I am confident that you and I in our interaction with the little ones are able not only to recognise the gems resident in them, but to do what we can to develop their divinely ordained skills.”

The Minister stressed that whilst education is paramount, it must be coupled with other equally important skills and qualities in order to achieve true success.

She said: “We recognise the holism of education. We recognise that excellence speaks not only to one’s intellectual capacity but also to one’s character, one’s tenacity, one’s ability to get along and even more importantly, one’s willingness to share and to give. This is why we ask that while we emphasise academic excellence, that we focus to on the holistic development of our citizens, that yes indeed they will have some competency, but more importantly, that they will be law-abiding, compassionate and generous citizens.

The VOICE spoke to Civil Servant, Catherine Vitalis, who is the mother of Rocyn Vitalis who won four awards including one of two Island Scholarship Awards presented by Governor General Dame PearletteLouisy. The single mother could barely contain her pride as she bound up the stage steps to collect her son’s awards.

Vitalis said she is extremely proud of her son’s achievement, but was not surprised since she knew that her son was a hard worker who always aimed for the best.

She said she was always his number one fan and supporter who taught him to always stay focused on his work, have a positive attitude and to be a well-rounded and disciplined student.

The proud mother said her son maintains the philosophy that it does not matter what subject one chooses, as long as it is one that they love, and seeing that he has always been passionate about the subjects; Economics, Finance and Statistics, it was understandable that he has excelled.

Vitalis said it takes a lot of patience and work, especially as a single mother to help a child reach this level of achievement.

She said: “You have to lead by example. You must mean what you say and say what you mean and most importantly, you must never have double standards.”

Vitalis said she was initially worried about her son’s future education as she is retired; however, his hard work paid off and he is now the recipient of two scholarships. He is currently working through the first one at the University of the West Indies in Trinidad and he now has the Island Scholarship in hand to use once he has completed his current course.

When it comes to rewards, Vitalis said it is a two-way street and both her and her son have rewarded each other through his successes.

Another big winner of the day was SALCC student Dion Recaii who walked away with five awards, namely Outstanding Performance in CSEC/CXC Geography, Human Biology, Principles of Accounts, Information and Technology and Physics.

The proud teenager said he was grateful to everyone who helped him along the way and he was beyond happy with his achievements.

He said: “I wanted to achieve this so I pushed myself. My parents and teachers also helped me. I will continue to do well and hopefully collect some more awards along the way.”

His beaming mother, Sandra Recai said her son has always been an over-achiever, but the awards started to pour in as soon as he started secondary school at the St. Mary’s College, and she couldn’t be more proud.

A total of 78 awards were handed out in 12 categories including CXC/CSEC Awards for Arts, Social Sciences and Physical Education, Humanities and Natural Science, as well as Special Education Awards and Common Entrance Awards.

The event ended with the presentation of the coveted Island Scholarship Awards which went to Dion Recaii and Nikita Greenidge.