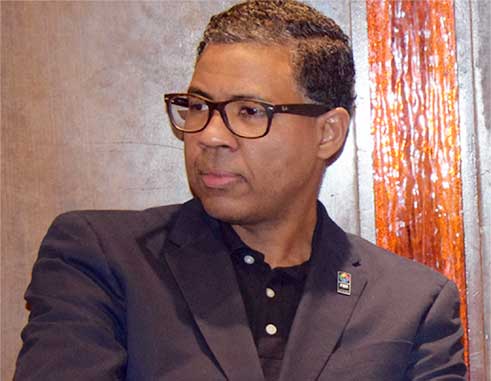 YOUNG St. Lucian basketball players, both male and female, have been given the opportunity to show and strengthen their skills with hopes of playing in an international arena with the upcoming inaugural Lesser Antilles 3×3 International Youth Tournament which is to be held in St. Lucia in the coming months.

Caribbean Basketball Confederation (CBC) Vice President of Finance and Marketing, Patrick Haynes sat with members of the local media on Sunday at the Landings resort during the Media Association of St. Lucia’s EGM.

Whilst there, Haynes revealed that the exciting new venture to St. Lucia promises to raise local basketball players to the highest level of the game that they could possibly rise to.

The tournament, which is roughly around five years in the making, has grown rapidly in popularity around the globe, and is similar to beach volleyball or futsol for football, but the game is played in the raw street style where players face each other three on three with only one substitution and no coach. The game is played on half of a court and the game is played for10 minutes.

Describing the game, Haynes said: “It’s a very fast paced game where players have to make decisions for themselves and not a coach making the decisions for them. So it’s not only the athletics but its being able to strategise and learn defences and come up with offences to play this game. We a FIBA are pushing this to be an official sport at the Olympic events, so in the 2020 games, our aim is to make this an official competition. It is currently the official basketball tournament in the youth Olympics…they do not play full size, they play three on three so we’re trying to grow it in that aspect of making it worldwide in the Olympic platform.

This tournament is specifically for the under 18 boys and girls born on January the 1st 1999 and after. The event targets the islands of the Lesser Antilles from the British Virgin Islands all the way to Aruba.

Haynes said he is confident that this tournament will be beneficial to St. Lucia in more ways than one.

He said: “I think it increases sports tourism. I think this falls right around your independence weekend, so this is a good sporting event to climax the independence activities. It will get a lot of youth involved. It is something else to do rather than partying or something like that. It is cultural, sporting and will be trendy and exciting for other countries to be here to learn about St. Lucian culture, not just basketball. We are also incorporating a social aspect of the event where all the kids will be attending cultural and social workshops so that they can learn other Caribbean territories.”

Haynes continued on to say: “This is a unique platform for identifying talent. By seeing this tournament, it will motivate our youth to stay in school. There are scholarships that are available…it’s not just this tournament and it’s done, it grows from here. This is the beginning stage and as you play and win, you gain further tournaments, you get further exposure, you get opportunities to travel and meet new exciting people, you get to play against better and stronger competition which would help them to motivate themselves and work harder at what they do, because like they say, the harder you work at a particular discipline, the better you will be at it. So if you practice longer and harder, you will be better and this will definitely have that driving for kids to be better.”