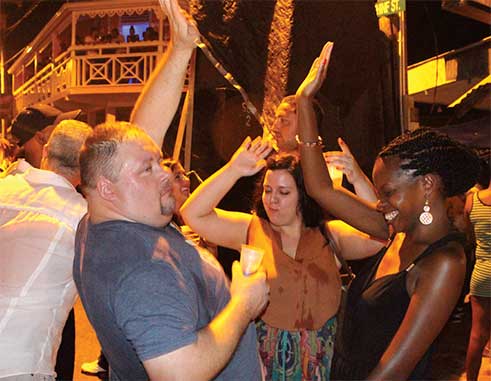 AT least eight persons sustained gunshot wounds to various parts of their bodies following two shooting incidents in Dennery and Gros Islet, less than two hours apart over past the weekend, resulting in three of them being hospitalized.

The first shooting incident occurred on Friday at approximately 11:50 p.m.

The Fire Service Department reported that a call came in from the Dennery Multi-purpose Centre informing of a shooting incident. Upon arrival, two male individuals were discovered with what appeared to be gunshot wounds, with one suffering from a wound to his right thigh and the other to his left abdomen. Both were transported to the St. Jude Hospital via ambulance in a stable condition.

The night sky over the Gros Islet Friday night street party pounded not only with music from the outdoor speakers blasting the latest and popular tunes of the day but from gunshots as well as one man opened fire near the pier hitting six persons.

“We have received reports that a number of rounds were discharged,” Assistant Superintendent of Police Gregory Alexander said, adding that the incident is under investigation by the Gros Islet Police and occurred at about 1:40 a.m. Saturday.

“Some (of those injured) were treated at the hospital and discharged. However one has been admitted for surgery this week. The police are following leads in the matter and will keep you updated” Alexander told reporters yesterday.

The fire department reported that a female came into the Gros Islet Fire Station requesting assistance with what she claimed to be a gunshot wound, which she said she sustained at the Gros Islet Friday Night event. She was assessed and transported to the Victoria Hospital in a stable condition via ambulance.

“Another individual also came into the Gros Islet Fire Station, reporting multiple casualties from a shooting incident in the town of Gros Islet. As a result, three patients were found, one refusing transportation to a medical facility and two being transported to the Victoria Hospital via an ambulance from Fire Service Headquarters,” the fire department reported.

Details about what led to the shooting in Gros Islet at a time when the place was congested with tourists was not forthcoming from either the police nor the fire department.

The VOICE, however, learned that the incident resulted from an altercation between two men over a woman.

Ishmael is due to undergo surgery later this week.