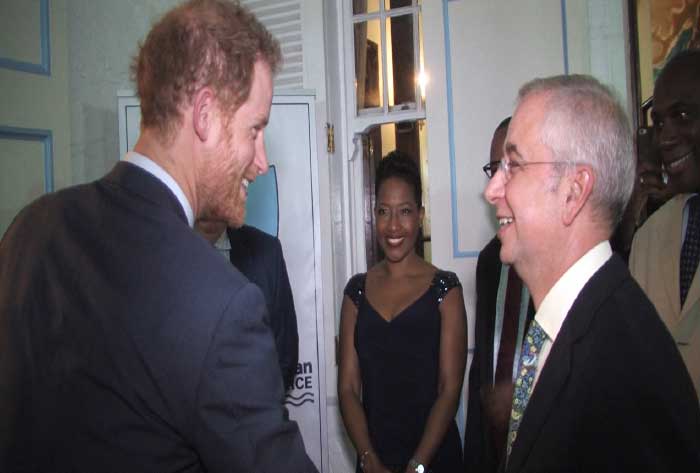 PRINCE Harry’s visit to the Island this week is significant because it reminds us that this is the first ever official visit of a member of the Royal family of his generation to Saint Lucia. Given that the country is just one of the 16 Commonwealth Realms outside the United Kingdom where the Queen remains Head of State, it is welcome if a little overdue.

The legacy of the Crown has been an on-off topic of debate since the foundation of the Commonwealth and in Realms such as Canada, Australia and New Zealand the question has been put to referenda and on each occasion the republican movement has failed to carry the day. But these countries have also seen much more frequent interaction with members of their Royal family, who visit on a regular basis and who have been regarded as far preferable to any alternative, either in principle or in person.

The continuation of the Crown beyond the frontiers of the United Kingdom and after the reign of Queen Elizabeth II is not something that can be taken for granted. Even after the referenda in Australia and New Zealand there is still a strong body of opinion that believes that the start of the next reign will be the logical time to embrace the full repatriation of their constitutions.

Time will tell if that will be the case but it is certainly likely that the monarchy itself is aware that greater presence and regular contact will enable the citizens of each of the countries where the Sovereign remains head of state to be better informed of the role they play.

There is an intrinsic dilemma which affects those citizens who do not already have an entrenched view and that is the practical reality of the alternative and the benefits of one system against the other in the everyday life of the country.

Republicans argue that their preferred structure is directly accountable offering a home-grown and resident first citizen who can be removed from office at regular intervals, by the will of the people, rather than being a life-long encumbrance.

Of course the argument advanced by those who do not subscribe to this opinion rest heavily upon the fact that in the head of state, under the Crown, there is likely to be less division within the nation in terms of the character and opinions of the holder of that office given that the Monarch is and must remain non-political. The ceremonial role, which is a necessity in the execution of state functions, is therefore benign. Imagine if the UK had just been through the Brexit debate with a figurehead who had taken sides during such a deeply divisive time?

Prince Harry’s visit highlights this conundrum. The visit is by its nature free of politics or a political agenda even where the Prince represents the Crown at events designed to mark political landmarks such as independence. It is also undoubtedly the case that this visit will attract international interest and focus on the small nations in a way that no elected head of state could expect to do and that such attention helps represent many of the fine aspects these countries are proud to display.

This visit to the region will focus on meetings with inspiring conservationists and young leaders, well-known cultural figures and national sporting stars and the impressive work of a number of important local organisations and charities.

On Friday Prince Harry’s schedule took in an exhibition cricket match at the Daren Sammy Cricket Ground between two teams competing on behalf of His Royal Highness and the Prime Minister and then a journey on to Pigeon Island to attend an outdoor exhibition highlighting various conservation projects run by the young people of Saint. Lucia.

In Soufriere the Prince and his party arrived to the sights and sounds of a Saint Lucian street festival, with traditional food and drink on offer at local markets stalls and the opportunity to meet members of the public, youth leaders and local school children.

These events highlight the reality of the mixed view on the relevance or irrelevance of the monarchy in the lives of the citizens of this country. On the one hand it is perfectly true that it is not necessary for the Crown to be represented at such celebrations, but on the other it is undeniable that the Prince, even on his first-ever visit to the island, has proved to be a draw and focus in a way that perhaps civic or political leaders would struggle to achieve.

But time waits for no man and at some stage in the not too distant future a decision on the status of this Island, either as a Monarchy or a Republic, with a fully repatriated constitution is going to be taken. We have seen mixed results in the Caribbean when this question has been put, but Saint Lucia’s own Constitutional Review has made recommendations and these will direct the debate when the time comes.

This joint review, by the government and the opposition, whose roles have now been reversed, culminated in a 300- page report and included over 100 recommendations, one of which was the abolition of the monarchy and another the removal of the Privy Council as the final Court of Appeal.

It’s anyone’s guess how all this will play out over the next 10 years. We have seen from recent political earthquakes around the world that what is supposed to happen doesn’t and that there is a newfound tendency for the electorate to reject the commonly held positions of their ruling class.

Few of the arguments in this debate will be new and I would speculate that the deciding factor, in the end, will be one of trust and benefit and not a simple question of how ridiculous or otherwise it may seem to have a hereditary head of state.

Republicans will continue to argue that the first citizen of Saint Lucia should not be a Governor General whose status is that of vice-regal representative, but in its place a president. They have a powerful logic in claiming this to be a simple matter of democratic accountability. In life however we sometimes also see that logic is not always the answer and there is much to be said for having a non-political national figurehead. We need only look to the North American continent to see it divided on the one-half by Canada, a monarchy and on the other by the United States, a republic. But there have never been demonstrations on the streets of Canada in protest over their head of State.

Advocates of the status quo will point out that a president almost inevitably costs the public purse far more than a king or Governor General and that part of this cost inevitably supports political activity. In America maintaining the head of state is 20 times more expensive than the cost of the monarchy in the United Kingdom, with $1.6 billion budgeted in the US, of which security for the President costs at least $2m a day, just keeping the President alive and out of harm’s way.

This is ultimately a question that only Saint Lucians can decide. In the meantime during his visit which ended yesterday, Prince Harry was extended a warm welcome and he was home from home. The future is for another day.