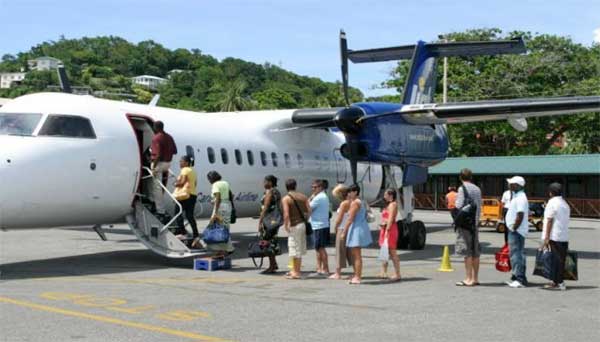 Say They Have Issued No Threat of Industrial Action.

ST. JOHN’S, Antigua, Oct 17, CMC – The Leeward Islands Airline Pilots Association (LIALPA) has described as “irresponsible” a statement by the Antigua-based regional airline, LIAT, warning passengers of possible disruptions as a result of ongoing talks between the two parties.

“We have not issued any threat to the company for any industrial action. I went on record…clearly stating to the public that if certain demands were not met I would return to my organisation for some direction,” LIALPA president Clarke Burke told the Observer Media on Monday.

In its weekend press statement, LIAT said it was advising its passengers to monitor electronic and print media, as it continues to hold talks with the pilots’ association.

LIAT said while the company and LIALPA discuss a number of internal industrial matters, the service provided to the public by LIAT is being threatened with disruption by the pilots.

Last week, LIALPA called on LIAT, to end the “stalling and delaying tactics” and provide accounting information regarding the retirement funds of its members.

It said it has been trying unsuccessfully for the past three years for the cash-strapped airline to provide the information and as recent as December last year, the company refused to respond to proposals from its attorney.

The union said that it has no other choice but to make a public appeal for LIAT to produce audited statements of pilots’ contributions into their Retirement Fund.

“We demand nothing less than a company that conducts its business in a transparent and accountable manner. This would ensure the continued cooperation and enthusiasm the pilots have shown to the company in the face of this ongoing three year old ordeal,” LIALPA said.

But in its statement, LIAT said it would not respond in the media, regarding these matters and claims that it had taken all reasonable steps to address the concerns raised and to keep the members of LIALPA informed of progress.

Among concerns are the packed schedules – less meal breaks, unsatisfactory pay and the poor handling of breaches by pilots.

Burke said that the company “did provide a letter from KPMG, on Friday, stating that the audit will be completed by October 31.”

He said that LIALPA was a “reasonable organisation” and recognised that a “reputable firm like KPMG” could be relied upon to produce the report and that LIALPA is now waiting until the completion of the audit.