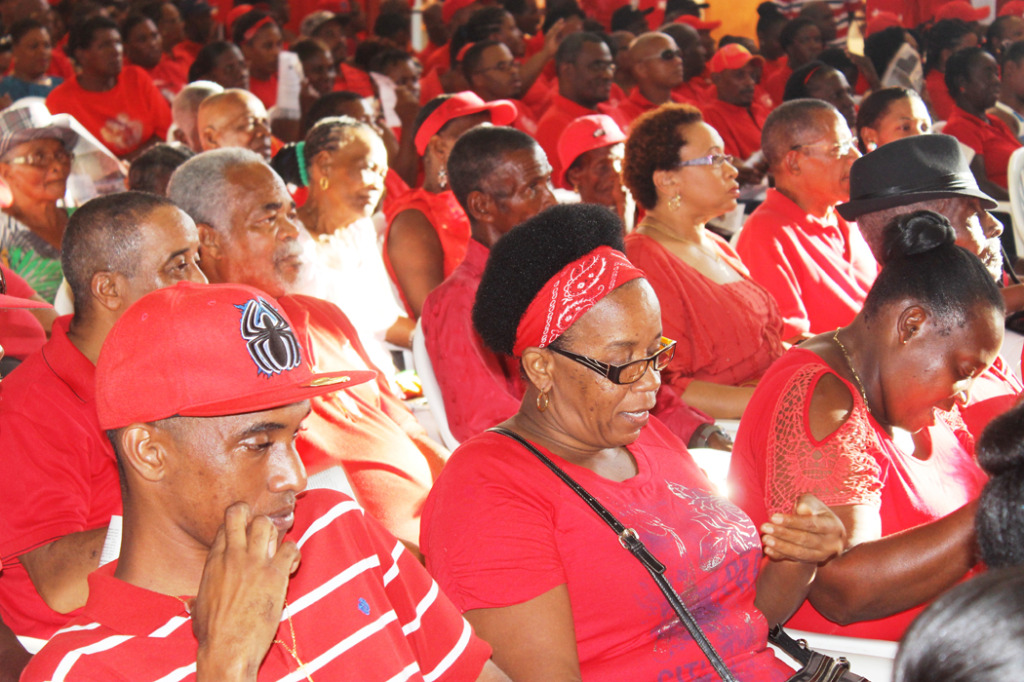 THERE is a lot of hemorrhaging happening in the Saint Lucia Labour Party camp these days. But one needs to really tune in to certain frequencies or use a lot of Q-tips to notice just how disenchanted many supporters are, whether or not some ultra-proud people care to admit it.

For many supporters, the party’s recent loss at the hands of a political party that had spent most of the last five years under a spell of infighting and cutthroat politics does not seem to bode well, especially for the die-hard faithful whose pride is now bloodied and bruised.

At both the open and closed sessions of the party’s Conference of Delegates held earlier this month, what one did not deduce from the general body language of some party higher-ups, the delegates themselves would divulge at will, often within hearing distance of media personnel. Some even wanted to go on record to register their disdain at being treated less than gods by the party.

At the open session in Belle Vue, Vieux Fort, the emphasis was squarely on Labour’s efforts to mobilize, organize and consolidate – words that formed the conference’s theme. In that endeavour, party officials said that despite their losses, a concerted effort would be made to re-strategize, revitalize and return to office long before the United Workers’ Party’s five-year term would have ended.

However, the general sentiments at the closed session held at the Leon Hess Comprehensive Secondary School a week later seemed to suggest that what the Labour Party needs is new blood, especially at the top, and an end to playing nice.

Delegate after frustrated delegate argued that certain people at the top who have their bread buttered, toasted and decorated with creamed cheese could not care less about those ‘scrunting’ at the bottom end of the party. Some complained that the last government even went as far as – get this – giving good-paying jobs to known Flambeaus, leaving faithful Labour hearts broken and breadless.

Now even if former Prime Minister Dr. Kenny Anthony is to be faulted for many things, this one should not make the list. That supporters of a political party feel that they earn first dibs at jobs provided by a government just because their party happens to be in power is, well, downright unfair to taxpayers in general.

Ironically, at least four delegates approached me and asked me to investigate why nearly forty bus drivers contracted by the government to transport schoolchildren were axed from the payroll because they were deemed to be Labour Party supporters. Notwithstanding the glaring irony, no one should be losing their livelihood due to political discrimination, especially in a climate when every Saint Lucian is supposed to be deemed 100% Saint Lucian.

But the fears and woes now being faced by Labour Party supporters are real. In fact, even after Political Leader Philip J. Pierre explained to the delegates at the closed session that the media were invited in for the final moments of the session to record his final comments, many delegates were still fearful of their faces being captured on camera. Imagine that! People now having to live in fear because of the colour of tee shirts they wear.

Nevertheless, the Labour Party seems determined that its current walk in political wilderness will be a short one. However, with Dr. Anthony’s virtual silence on key issues over the past four months, many party supporters still express hope that he will return to the helm soon. This is not to say that Pierre is not a good leader. After all, he does come with many years of experience and achievements. But some supporters believe that Pierre is taking too much time to exert his authority as would a more charismatic and decisive Dr. Anthony.

Another quality of the Labour Party that supporters are upset about stems from the party’s handling of the last general elections. Many believe that less focus was placed on the candidates while too much was exerted on negative campaign ads and other distractions. Some even expressed their discontent at just two women being chosen by the party to run as candidates while the UWP fielded four.

But all is definitely not lost for the Labour Party. For a 65-year-old political institution that has recorded the best mandate ever from the electorate with a 16-1 landslide victory in 1997, their recent defeat might just be the temporary stocktaking period the party badly needs. In fact, the UWP went through some internal transformation of its own following its loss at the polls in 2011, including three consecutive wins for Allen Chastanet as political leader.

While the SLP is now in the process of introspection and calls for changes to the party’s constitution are being made, it might want to reconsider the clause/s that call/s for the position of political leader to go unchallenged at party conventions. That constitutional change caused much angst and exodus in the past and who’s to say that it doesn’t presently? I’m sure that delegates would now want a more democratic process as far as the election of party executives is concerned.

Also, the party also needs to address some proverbial elephants still standing in the room as far as its handling of crucial matters, especially on the cusp of the last general elections. For instance, we are yet to hear the rationale behind the long-term political appointments of people to serve in top positions. In some cases, these contracts are due to end years after the last administration’s tenure was due to expire. Thus far, the only response I have received from a party supporter was that the Labour Party felt strongly that it would have won the elections. I think a better explanation is out there somewhere.

Despite all this, the Labour Party must be commended for taking the stance of not merely opposing for opposing sake. At least that’s what party officials say they intend to do as they try their best to keep the government in check. Too often, one gets the impression that politics must always be adversarial at the expense of any progress that could be achieved had bipartisanship been chosen.

But the quicker the Labour Party mobilizes, organizes and consolidates itself, the better. As was the case when the UWP lost the last general elections, Saint Lucians certainly do not deserve a weak opposition ‘scrunting’ to keep a government on its toes. We need strong representation from the opposition, especially as it relates to bread and butter issues as VAT and unemployment and social issues such as crime and the provision of basic human services.

The Labour Party also needs to encourage the open and frank discussions that transpired at its closed session, whereby supporters who felt slighted can express their feelings. The party should also embrace the fact that some supporters might not want to be restrained by airing their feelings only in a party setting. Sometimes unconditional transparency is needed so that general accountability is possible. After all, the UWP camp bared so many of its skeletons over the years and was still able to change the course of a general election in a matter of weeks.

One of the Labour Party’s biggest tasks in its current phase will be how it deals with the government’s handling of the promised revision of the VAT rate. Having been given over four months to settle in, it remains to be seen whether the government will show slate by delivering some real ‘chingching’ to the people’s pockets. If you asked me, if Saint Lucians are given more excuses than savings with the revised VAT rate, the Labour Party stands to earn some far-reaching political mileage, something it badly needs presently.