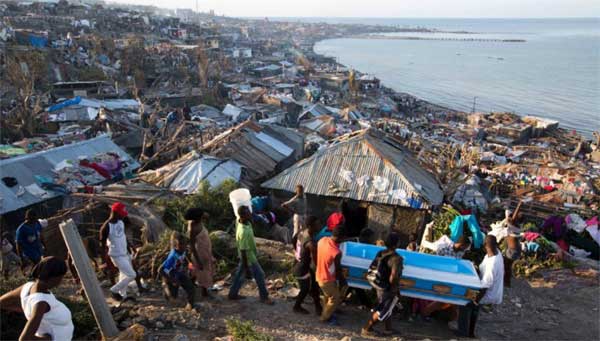 St John’s, Antigua, 17 October, 2016) Antigua and Barbuda Prime Minister, Gaston Browne, has announced that his government is giving US$100,000 to Haiti to help its people cope with the humanitarian crisis facing the country as a result of Hurricane Matthew.

In addition, the Prime Minister has revealed that the Government of Qatar has pledged to him that it will make an immediate donation of US$500,000 to Haiti.

The pledge was made by the Prime Minister of Qatar, Abdulah bin Nasser bin Khalifa Al Thani, in Doha last week when he and Prime Minister Browne met to discuss bilateral matters.

The Antigua and Barbuda leader said that in his meeting with the Qatari government, “I was very conscious of the dire circumstances of the people of Haiti and the need for as much significant help as I could encourage for them, so I pleaded their case with Prime Minister Al Thani.”

Prime Minister Browne revealed that, in a letter dated October 16 he has received from the Qatar government, it has been confirmed that not only will Qatar give Haiti immediate help but will also provide “long-term support for the reconstruction of effected areas of Haiti.”

The Qatari government letter noted “the very impressive outreach made to our government” by the Antigua and Barbuda leader “on behalf of Haiti”. It continued: “We note your direct efforts to encourage Qatar to assist Haiti. Your leadership and dedication to your region has allowed rapid and immediate support to Haiti from the Qatar Fund for Development.”

Prime Minister Browne said that he is “delighted by the Qatari government’s swift response and its commitment to continuing support for Haiti”. “This is what our Caribbean Community should be about, looking out for each member state and the welfare of all our peoples. In this regard, I am especially pleased that my advocacy for Haiti with Qatar has borne fruit.”

About his own government’s financial contribution, Mr. Brown said: “Despite our difficult circumstances, my government regards it as our fraternal duty to provide a hand to help relieve the unimaginable suffering of our brothers and sisters in Haiti.”