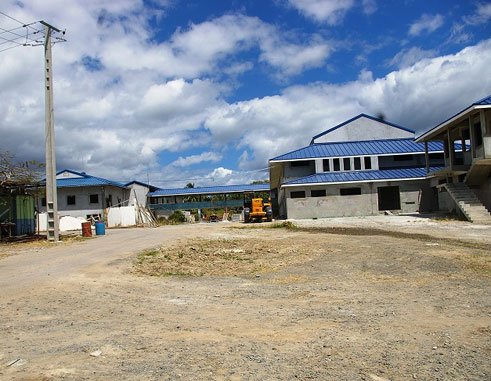 Sponsored
Share this post:
MINISTER for Economic Development, Guy Joseph, says the technical audit now underway for the new St. Jude Hospital is costing taxpayers nearly $800,000 and should be completed by this month-end.

Joseph refused to disclose the names of the people conducting the audit at the St. Jude Hospital, saying only that it will be done by “a team of persons”.

That sum, he said, is not included in the estimated $95 million reportedly spent to date on the incomplete hospital which would replace the former structure that was gutted by fire in September, 2009.

Joseph said more than $50 million more will be needed to finish the hospital for which construction began over five years ago, adding that as much as $12 million has been paid in consultancy fees for the project.

He said the project is laced with considerable secrecy and instances of mismanagement, adding that the previous SLP government is to be blamed for prolonging the project and paying too much for getting little work or progress done.

“Back in 2011, (the government) asked the suppliers of equipment to expedite the shipping of equipment for the hospital. We’re now in 2016 and the hospital is nowhere closer to being finished,” Joseph said when he appeared on TALK with Rick Wayne on Thursday evening.

Joseph said a tour of St. Jude hospital was among his first duties since becoming a government minister in June. He said he was appalled at the state of the project during that visit and expressed his concerns to the project’s contractor and related personnel.

“In my interview that day, I said if I had the authority and these people (in charge) were working for me, I would have fired everybody working on site forthwith,” Joseph said. “But I understand that as a minister, what I can do is limited.”

The minister said he has since been able to terminate the services of the two leading entities who were involved with that project. However, locating key documentation on the project has been futile.

“In one instance, when we wrote to one of the companies involved, we had to copy the letter to the police because we had to threaten to get the police involved (in order) to retrieve what belongs to the government of Saint Lucia,” Joseph said.

Joseph said the St. Jude Hospital project is now in a “standstill” phase following his decision to end construction works there momentarily to undertake the technical audit. That audit, he said, “is going to inform us about everything as to where we are, what needs to be done, and how it should be done.”

“Because there are no plans, we have to go and do as-build drawings now and then complete the plans. But when we are finished with this, we have to find out how much money was paid to the people working on the hospital for the plans. Every cent that was paid to them must be paid back to the government for not delivering on what they were paid to do,” Joseph explained.

Joseph said he met with a biomedical engineer this week who told him that equipment ordered for the hospital have not yet been manufactured since they can only be manufactured at least three months before the completion of the hospital and takes about four months to set up in the hospital.

He added that two containers of equipment that arrived in Saint Lucia for St. Jude Hospital nearly four years ago were stored improperly by being left in the heat, resulting in them being spoiled.

“The warranty period ran out on this equipment, so they are no longer usable,” Joseph stated. “That equipment is needed at both Victoria Hospital and St. Jude Hospital (the latter currently housed at the George Odlum National Stadium).”

Joseph said no dates have yet been determined for the opening of both the new St. Jude Hospital and Owen King-EU Hospital. However, he said the technical audit’s report should give government a better understanding towards establishing a completion date for St. Jude Hospital.

When asked by The VOICE yesterday to comment on the allegations made by Joseph, Leader of the Opposition, Phillip J. Pierre, said Joseph’s allegations are preemptive of the audit itself. He believes Joseph should await the results of the audit and let Saint Lucians make their judgment.

“What he’s doing is just trying to muddy the waters for him to make something that is obviously technical, political,” Pierre told The VOICE.

Pierre said his office will issue a formal release on the matter on Monday.