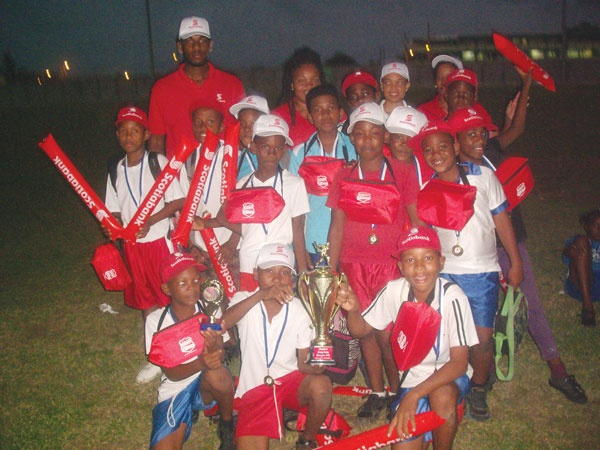 SCOTIABANK has again reiterated its commitment to the development of Kiddy cricket and the game at the regional level.

The assurance was given last Thursday by the Bank’s Kiddy Cricket champion Carol Henry while addressing the District 6 Kiddy Cricket Festival.

Vigier Primary School emerged as the new champions of the District in a classic “David and Goliath” duel.

The victorious school, with a population of less than 100 students, scored 126 runs while Vieux Fort Primary managed 124. As a result of their victory, Vigier will represent the district in the national competition today at the Mindoo Phillip Park.

Defending champions, Augier Combined School placed third after they were defeated in a semi-finals by Vigier.

The other schools which took part in the competition were: Blanchard Combined, Pierrot Combined, Belle Vue Combined and Desruisseaux Combined Schools.

The event which was held at the Phillip Marcellin Grounds in Vieux Fort last week, generated much interest among the teams that participated and spectators.

In remarks, Carol James Henry, Scotiabank Kiddy Cricket Champion, said Scotiabank was committed to the development of Kiddy cricket and the building of West Indies cricket now and in the future.

“Since 2000, Scotiabank has proudly and exclusively sponsored Kiddy cricket and remains the official bank of West Indies cricket. This year marks the 16th anniversary of our Kiddy cricket sponsorship and as we all know, 2016 was the year that West Indies cricket team achieved the unthinkable and unimaginable feat of winning all three world titles of the T 20 format,” Henry said.

He said Kiddy cricket includes more than 726 primary schools around the Caribbean with over 108,000 primary school students receiving regular after-school coaching from trained coaches. He added that in the last 16 years, over 750,000 children have passed through the programme.

He called on the young cricketers to keep training and practise what their coaches have taught them because it is the first step towards the path to bigger things.

He told the students that sports and education go very well together and that there are tremendous benefits to be reaped in sports with many success stories to support this point of view.

Steven Auguste, principal of the Beanefield Comprehensive Secondary School, who represented the Education Officer for District 6, Peter Joseph, in his remarks said: “The excitement and enthusiasm displayed by the young talented cricketers, coaches and teachers as well as principals, is an indication of your readiness to participate and compete.”

“We are pleased with the investment our sponsors have made in the development of our youth. The district is noted for its outstanding performances in school sports and your investment will help to further develop our sporting talents. In this particular instance it is cricket,” Auguste said.

He said the investment may contribute to the development of another national and probably West Indies cricketer, adding that the festival provides students with the opportunity to learn the basic knowledge, skills and attitudes of the game.