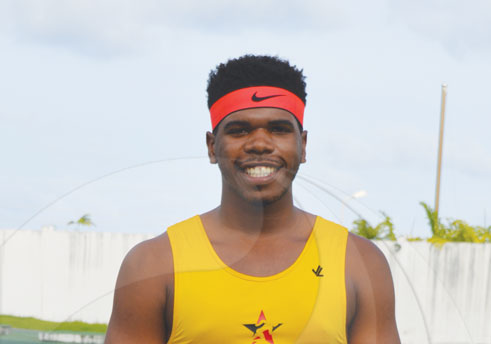 ANOTHER young St. Lucian track and field athlete will soon be leaving our shores to further his education and to continue his exploits in the sport. Nineteen year old Desron Desir is heading to California State University – Fullerton in the United States of America.

Desir who hails from the community of Grande Riviere, Gros Islet, is a member of the recently crowned national relay club champion team Morne Stars. While in the USA he will be studying a degree in Accounting and minoring in Kinesiology, while also representing the University in the long jump and triple jump events at the NCAA Division 1 track and field championship.

The VOICE caught up with Desir last Saturday during the National Club Relay Championships at the George Odlum Stadium in Vieux Fort. He said he started track and field when he was in form 4 at St. Mary’s College.

Said Desir: “I just had a love for long jump; I won the event at the Inter secondary track and field meet. My present coach Terry Finisterre asked me to join Morne Stars, I did not hesitate. I started training with him almost immediately. I made the Windward Islands team two years in a row. I was the captain in 2015. From there I continued to train and my main goal was to get into a University and through school I wanted to get a track and field scholarship”.

He added: “My dream has come true; I will continue to train hard in St. Lucia as I wait to go to the USA in a few days’ time. My other goal is to qualify for Olympics in 2020.”

How did it all happen for you?

Desir responded: “I was at practice one day and my coach told me Rockets Track and Field Head Coach Martial Charlery and a coach from in the USA wanted a long jumper for his club and he didn’t have any jumpers so he checked on me. I was asked to send certain documents to the USA which I did and the rest is history. I went up to the USA in February. When I went up to the school, they took me to a meet and a few weeks later when I got back to St. Lucia I was told that I have been accepted to the school with a scholarship.”

With only a short spell in athletics so far, Desir admits that his progress has been speedy. “Everything has moved so quickly. I really don’t know how. I really didn’t expect to reach this far. I just love the sport so I continued what I was doing. I didn’t see myself reaching this far, getting a full scholarship, but God has a plan. I just stuck to it; I got what I wanted”.

Desir said locally, he has not lost in his age group since Form 5. “My last defeat was in Form 4. At inter secondary school track and field championships, I am the long jump champion with a distance of 6.47 metres. After inter secondary I trained with Coach Dane Magloire. With hard work and perseverance I jumped 7.10 metres and it earned me a spot on the Windward Island School Games Team. I went on to the games in Dominica and I won gold in the long jump and silver in triple jump”.

This year, Desir has had a personal best in long jump at 7.15 metres. At the upcoming national individual track and field championships slated for June 25 and 26 at the George Odlum Stadium, he expects to go past 7.15 metres.

Desir sees one threat in Lenny Leone, the Carifta champion in 2009 who trains with him.

The young athlete said his parents have been supporting him, from day one. “My mother was always supporting me, but she kept telling me my education had to come first. My coaches Terry Finisterre and Dane Magloire, are a big help to me – two of my mentors, I look up to both of them. They helped me mentally and I want to publicly say thank you Terry and Dane”.